There’s lots more serious stuff to blog about today (and everyday!), but this is too good not to use to chum the Balloon Juice lagoon:

Numerous members of the British parliament have complained that they have received multiple emails from the Trump campaign asking for a donation. “Members of Parliament are being bombarded by electronic communications from Team Trump on behalf of somebody called Donald Trump,” Sir Roger Gale said on Tuesday, according to Politics Home. “Mr Speaker, I’m all in favour of free speech but I don’t see why colleagues on either side of the House should be subjected to intemperate spam.”

Sir Roger seemed to have trouble even deleting the Trump emails.

“Efforts to try to have these deleted have failed. I wonder if you’d be kind enough to intercede with the Digital Services Department to see if they may be blocked,” he lamented.

Image: Peter de Hooch, Man Handing a Letter to a Woman in the Entrance Hall of a House, 1670.

END_OF_DOCUMENT_TOKEN_TO_BE_REPLACED 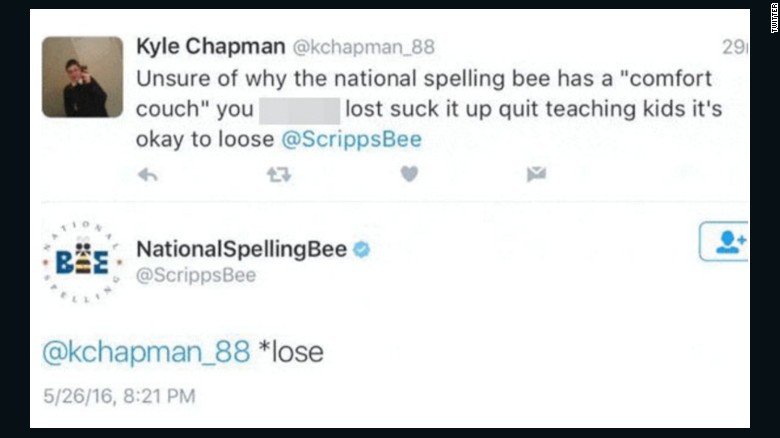 Obnoxious and ignorant is no way to go through life, son.

END_OF_DOCUMENT_TOKEN_TO_BE_REPLACED

Not to put a downer on the site after the quadrapedal delights below, but this nugget from the festering gob of one Jeff Weaver caught my attention:

While he was not at Saturday’s convention, Weaver said that based on the account of Sanders surrogate Nina Turner, the reports of a violent atmosphere had been overblown.

“She said, no one went on the stage. No one had the right to feel threatened,”

Oh no — no right at all to think a howling claque might do harm, wasn’t already doing so. Instead, Weaver argues, it’s all the fault of those facing what he sees as righteous fury:

“What happens is when you rig the process, and you get an angry crowd, you know they’re not used to that.”

Again with the bullshit about a rigged process — one in which Bernie’s folks failed to show up, didn’t register, and all that.  But that’s beside the point here.

Here’s some  middle aged white guy telling those — headed by a women — running a meeting what they get to feel, what they’re allowed to view as a danger.

Makes me weep for my Y chromosome, as well as my party and my country.

I know this is piling on the Balloon Juice Bernie-bile, but I have to say — this one makes the MRA strain in the Sanders campaign shine in high relief for me, and it ain’t pretty.  More to the point — it ain’t what Bernie asked folks to sign up for months ago.  Power — just the whiff of power — corrupts even (or especially) those convinced of their own sanctity.

Image:  Thomas Gainsborough, Study of a Woman in a Mob Cap, undated (before 1788). [Sorry — couldn’t resist the pun]

END_OF_DOCUMENT_TOKEN_TO_BE_REPLACED

Yes, the Democratic primary has entered its manic and ugly phase.  Yes, I’d dearly love to see Bernie show some sign he truly cares about getting either Democrat into the White House before any other ambition.  And damn-straight I’m ready to just make it all stop.

But it could be worse.  We could have to face this from one of our own candidates:

“It’s a wonderful, wonderful holiday for our friends in the Jewish community – the Passover,” Kasich told reporters after emerging from the matzah bakery, a box of the fresh-baked stuff in hand.

Yes, Jews are known to love The Passover, almost as much they love The Pre-Election Drop-By from vote-seeking politicians.

…Kasich then launched into a brief appraisal of the links between Passover and, um, the blood of Jesus Christ.

“The great link between the blood that was put above the lampposts” – er, you mean doorposts, governor — “the blood of the lamb, because Jesus Christ is known as the lamb of God. It’s his blood, we believe …” [forwarded by a valued BJ reader]

Putz doesn’t even begin to describe the schmendrick who would say such a thing.  Putz is too grand a word, to expansive.  Kasich is a schmeckel, a schtickl, a petseleh, someone of so little use as to be barely worth noticing.

But oy gevalt, is this dumb!  I got two words for Kasich’s advance team:  blood libel.  There’s no bottom to the evil that comes from associating Jewish rituals with the blood of Jesus — and no limit to the stupid it takes to wander into such a thicket.  Ignorance is a pathetic excuse — to the point of being disqualifying (at least for any Jewish voter I know) in a would-be president.

It gets better, which is to say not so much worse as more bathetic.  Before hitting the matzoh bakery, Kasich tried to hang with some yeshiva bochers at a bookstore who told him that they were studying Talmud, specifically, the laws of the Sabbath.  Kasich’s comeback?

Yeah, John.  Just like we enjoy the top ten commandments.

It is to laugh.  And to mutter a little blessing:

Thank the FSM this guy is their problem, not ours.

END_OF_DOCUMENT_TOKEN_TO_BE_REPLACED

ETA: Annnnnndddd….always read the fine print.  I was taken in by a fake news story at a parody site.  Mea culpa.

I’ll leave this up as (a) a warning to self not to be an idiot, and (b) as a reminder of how hard it is (at least for me), in this election year of our discontent, to tell the difference between what should be obvious parody, and what is.

I’ll start by saying that no state could withstand a characterization drawn only from its most batsh*t crazy denizens.  So I apologize in advance for painting the great, diverse and fascinating state of Texas with a broad brush.

I’ll also note that it does matter a bit that so many of the most batsh*t insane Texans seem to end up in state government.  What this says about the too many of their fellow citizens* who put them there I’ll leave as an exercise for the reader.

Today’s Texan OMG S/HE SAID WUT???!!!! comes from TX state rep. Debbie Riddle (R-Planet Ten), who’s got a problem with the idea of one particular subset of her fellow double-X Americans doing their ladybusiness in public:

Rep. Debbie Riddle requested that the bill be modified to contain some conditions that not all mothers are going to like. Namely, the modified bill states, among other things, that “only women who possess the breast size C-cup or smaller shall be allowed to breastfeed in public areas.” Asked to comment on the discriminatory clause in the bill, Riddle simply stated, “Nature knows what it’s doing.”

I have to say that I really hope that this is somehow a hoax, that Riddle really didn’t say what she’s reported to said.  Because here’s where she is described as going next:

She also added, “It’s for the greater good. We already have more than enough distractions when walking the streets, and we don’t need this one as well.”

You know that old line, “when you hit bottom, stop digging?”  Riddle apparently does not:

“…everybody knows what happens when a woman with a D-cup size breasts starts breastfeeding her child in the park or on the street. Everybody immediately stops and starts staring.

Riddle also added that“studies have shown that women with bigger breasts are not commonly associated with modest behavior.”

Alright.  If the Texan legislator really did say all that (and more! — check out the link!) I got nuthin.  Or perhaps, as our legal beagle friends might say, res ipsa loquitur.

Ladles and Jellyspoons, have at it.  For me, I despair of the Republic.  Or at least that part of it that gave us the Honorable Riddle.

*Somewhere Rousseau — and Jefferson — are weeping.

END_OF_DOCUMENT_TOKEN_TO_BE_REPLACED

Look who Ted Cruz has recruited as his economic advisor:

If it’s true that a man can be judged by the company he keeps, what are we to make of the appointment of former Sen. Phil Gramm as economic advisor to the Presidential campaign of Ted Cruz?

Cruz made the appointment Friday, when he collected Gramm’s endorsement of his quest for the Presidency.

As Micheal Hiltzik points out in his coverage of this — what’s the word?– curious appointment, Gramm is exactly whom you’d choose if one global financial meltdown just wasn’t delicious enough:

Gramm left a long record as a dedicated financial deregulator on Capitol Hill, with much of his effort aimed at freeing up trading in derivatives. That’s why he’s often identified as one of the godfathers of the 2008 financial crisis, which was spurred in part by banks’ imprudent trading and investing in these extremely complex financial instruments. Gramm himself is undeterred by his own disastrous record, and clearly Cruz is equally unbothered.  That would be why both men are ignoring Gramm’s last appearance as a campaign surrogate:

Gramm’s previous stint as a Presidential campaign advisor ended inauspiciously. That was in 2008, when he served as co-chairman of John McCain’s Presidential run.

Gramm’s most notable moment in that position came on July 10, 2008, when he dismissed the developing economic crisis as “a mental recession” in an interview–and video–released by the conservative Washington Times. “We’ve never been more dominant,” he said. “We’ve never had more natural advantages than we have today. We’ve sort of become a nation of whiners.” McCain immediately disavowed the remarks, and a few days later Gramm stepped down as his campaign co-chairman.

I’m assuming that Ted Cruz does actually hope to become president, and thus makes his choices in the belief that they will advance him to that end.  So I can only see two possible interpretations for this exhuming of one of the most egregious poster children for GOP economic failure.

One is that this is what epistemic closure looks like when it’s at home.  It takes a hermetic seal between you and reality to think the “nation of whiners” trope is a winner this year (or ever, really, but especially now).

The other is that this is just trolling, or rather yet one more instance of believing an action is simply good in itself, transcendently so, if it pisses liberals off.  Which lands Cruz — and the GOP — in exactly the same place as option one: doubling down on the crazy for reasons extremely clear only to those with the correct implants in their upper left second molar.

All of which is to say that I remain firm in my belief that the entity identifying itself as Senator Cruz is in fact one of these guys.

“Where are we going?”

END_OF_DOCUMENT_TOKEN_TO_BE_REPLACED

SHARE UPDATE BURNS OREGON! CHRISTIANS THE BATTLE TRUMPET HAS BEEN SOUNDED TIME TO RISE! CALL TO ACTION SEND IN THE TROOPS TO STAND WITH US IN BURNS OREGON!

Just to ram the point home: if I were those guys I’d think long and hard about the story of Nadab and Abihu. False prophets do not usually achieve happy endings. A sheepish withdrawal is by far their best outcome…which would let them get back (continue) to fleece their flock.

But I’ll say this: those big horns are not that easy to blow. Kudos for that at least.