I hardly ever raise money for Biden but tonight’s a good time to give. 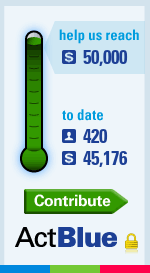 END_OF_DOCUMENT_TOKEN_TO_BE_REPLACED

Arriving back in Puerto Río Tranquilo we found the weather perfect for touring the Marble Caves (in Spanish Capillas de Mármol​, literally marble chapels). There are many tour boats that hold about 20 people each. They leave about every 15 minutes in a staggered schedule so they don’t all crowd around at the same time. There are several small islands that are eroded remnants of marble. The erosion is due to wave action and is believed to be a recent geological feature (6,000 years old). The water in the lake carries glacial sediment, hence the turquoise color. One of the islands is called the Catedral de Mármol​ and weddings are performed there.

END_OF_DOCUMENT_TOKEN_TO_BE_REPLACED

Melanie Trump just walked in wearing a mask. She removed it as she sat down.

A Cleveland Clinic doctor with masks just walked up to a number of unmasked members of the audience on Trump’s side of the room and asked them to put on masks. She told me they refused to take one and wear them. https://t.co/rNUFjLfUEf

Trump theme for the evening: Rules don’t apply to us.

"Will you shut up, man." and then smiles and starts laughing.

Trump has a problem here.

All he can do is filibuster and interrupt – but Biden is laughing at him. Out loud.

Joe Biden is already done with Trump’s BS: ‘Everything he’s saying so far is simply a lie. Everyone knows he’s a liar … do you have any idea what this clown is doing?’ #Debates2020 pic.twitter.com/EGB8MBO6LG

END_OF_DOCUMENT_TOKEN_TO_BE_REPLACED

Here’s a live feed from PBS:

C-SPAN is not providing an embed link. And finally, this pretty much sums up my view of tonight’s debate.

I’d rather catheterize myself with a rusty lemon zester in the back seat of a Kia driven by Prince Phillip https://t.co/fsZVYWFOob

END_OF_DOCUMENT_TOKEN_TO_BE_REPLACED

Joe Biden boards a plane to Cleveland for his first debate with President Trump. The Biden campaign has a new plane with the Biden/Harris logo on the side. pic.twitter.com/Wc3mTUgSWb

The Guardian liveblog is here. I’ll probably be following the debate there, and via your comments, plus of course my favorite twitter feeds.

The Post had a whole long story about what a perilous challenge the debate poses to Biden, with passages along the way mentioning that Trump’s aides cannot get him to pay any attention to debate prep and he refuses to practice

I’ll believe that Trump is growing into the presidency when his staff stops talking about him like a toddler. https://t.co/F0aShH3zMC

[This is the 1845th tweet in the #ToddlerinChief thread.] pic.twitter.com/xDC1Ica569

END_OF_DOCUMENT_TOKEN_TO_BE_REPLACED

Really. That’s it. I don’t expect to learn anything, I don’t expect anything beyond Trump lying and making shit up. I don’t care about who wins or loses according to shitheads like Chris Cilizza and other Beltway Bros, I don’t give a fuck what a bunch of circus clowns in the focus groups say, I definitely don’t give a fuck about what some dork named Boner in a red sweater thinks, and I remember four years ago when some lady CLEANED HIS FUCKING CLOCK three times saying shit like this and it didn’t matter:

So I don’t expect anything interesting and good to happen, but the potential exists for Trump to get his speed dosage wrong and some question or something Biden says set him off and the fucker just siezes up and drops facefirst on top of the podium and then hits the floor with a satisfying thunk, leaving behind only a trail of ooze composed of flop sweat, spittle, and orange makeup.

So I suppose that tiny chance is enough to get me to watch.

END_OF_DOCUMENT_TOKEN_TO_BE_REPLACED

Tom Sullivan at Digby’s blog posted an interesting idea on how the Senate Dems might handle the upcoming Barrett hearings, given that they are numerically powerless to stop Republicans from confirming the judge. Sullivan says the concept originated on history prof Bill Svelmoe’s FB page, and the gist is to turn the hearings into The Trump Show, with Democrats using examples of Trump admin malfeasance to elicit responses on legal questions. An excerpt:

Then simply go down the list of specific cases in which Trump and his family of grifters have used the presidency to enrich themselves. Ask her repeatedly if this violates the emoluments clause. Include of course using the American ambassador to Britain to try to get the British Open golf tournament at a Trump property. Judge Barrett, does this violate the emoluments clause?

It’s not a bad idea. The Trump admin is one long carnival of criminality, so the Dems wouldn’t run out of source material: Hatch Act violations, refusal to comply with congressional oversight, the Ukraine shake-down, family separations at the border, etc.

As Svelmoe put it, flipping the script this way would weaponize Barrett’s “supposed good character and keen legal mind against the administration that has nominated her. Let her either convict Trump or embarrass herself by trying to weasel out of convicting Trump. Either way, it’ll be great television …”

Sounds like a solid idea. What say you? Open thread.