I was back in NYC the first week of May because it was time to say a formal goodbye. My mother passed away on April 25th, probably around 5 am PST. I seem to only get to return to the city after some major change and, in a small personal way, this was as big as returning after 9/11. Just like that time, things are now permanently different than my memories.

We all start from somewhere and someone. For me that’s NYC and my mother. Granted, there was a brief stop in Jamaica but let’s go with what we can remember, shall we? Leaving NYC was a grand adventure for me, but I had no idea that it was going to be this long or that each time I returned, time kept changing the city and the woman. As discomfiting as change is, it also reveals. We grow more into ourselves as we age and some of the aura of infallible authority parents have drops as they age. NYC, with all it’s grimy magic, became more vulnerable in my eyes after 9/11 and much the same, when I returned in 2012, I realized my parents had somehow grown old too.

The NYC that is gone has revealed a NYC that is more crowded, even more split between the haves & have-nots but still teeming with energy and a diverse population that makes me proud and soothes. My mother that is gone revealed that she had a nickname to her friends and my stepfather; she was an active, busy beaver of a street minister and she even had plans of traveling next year to minister in South America. She had a large group of friends who are reeling from her loss, sisters that loved her and that she looked out for, mothering all of them in her own way. She adopted women as bonus daughters and my brothers’ friends knew her as a second mother as well. Which infuses me with pride and joy. The personhood we leave behind reveals our lives because death drops every barrier. It’s a good end when people mourn you.

My mother left me once as a toddler, to come to America and build a future for us both after she became a widower. She found my stepfather, bore 2 sons, had a long secretarial career and a retirement where she got to serve her faith. This time she’s left me in a different way. We get to see each other either again either as the flashing memories of my dying spark or when the spark of my spirit joins the fire that animates life. I don’t know which one it is. That’s the last mystery to uncover.

The loss of a parent brings a finality to your childhood that even growing your first set of greys doesn’t. Parents are permanent, right? Not so fast, says time. It’s not just the transition from care receiver to caregiver. It’s not explaining their cellphones and time zone differentials to them. You’re still their kid, even with your fancy expertise. Saying that last goodbye, though. That’s it. That’s when you aren’t a child any more. You are now changed into an actual adult. Not because of power, experience or your own money. Just that sense of loss of where you came from. That home is now just a memory because that parental presence is gone. Adulthood is where you have to be your own reassuring presence. I worry about my stepfather, who misses his best friend and partner of 50 years. I worry about my brothers who’ve never lived without their mom. Luckily, all the relationships my mother had have bound together to carry them. Church family reach out to them and pray with them, our blood & found family visit, our tenant drops off homecooked food. On top of that we also have each other. Like NYC, though, we are all changed. Hopefully, we will all live as mom lived, faithful, enjoying her Marvel movies and happily working to make the world a better world. After all, it’s not so bad to go if you leave them wanting more.

END_OF_DOCUMENT_TOKEN_TO_BE_REPLACED

Sorry to stomp on the sweetness below, but I learned yesterday that Lance Mannion, one of the old school bloggers from the early aughts, died in his sleep from what appear to be natural causes. I am sure many of you knew him and read him at one point and would like to know this. The link to the gofundme can be found here.

END_OF_DOCUMENT_TOKEN_TO_BE_REPLACED

NEW: NYT columnist David Brooks draws a second salary for leading an Aspen Institute project funded by Facebook, Jeff Bezos’ dad, & others. He didn’t disclose this to readers. The Times refused to say if the paper was aware of Brooks’ second salary: https://t.co/7WN3zrtrKp

Professional ethics are for the little people, eh, Mr. Brooks?…

At the Applebee’s salad bar, these men with younger wives discuss the importance of David Brooks being given a mulligan for this one. https://t.co/YMLPhylfXu

Along with columns about Weave, Brooks published Times columns that mention Facebook, its founder Mark Zuckerberg, and the company’s products without disclosing his financial ties to the social networking giant.

here’s some of the ways he responded: called the reporter ‘totally unethical,’ asked ‘if this was the way you want to start your career’ and told him he wasn’t ‘acting in the spirit of an honest reporter’

this seems like an open-and-shut violation of what i have to assume is NYT internal company policy. not that i think that will actually dictate whether any action is taken. https://t.co/ZX0XSijNw0

bit worried about Brooks’ upcoming title WHY NOT TO MURDER PEOPLE AND LEAVE THEIR BODIES IN THE SWAMP https://t.co/0IuGE1dlaD

END_OF_DOCUMENT_TOKEN_TO_BE_REPLACED My parents had to put down Ginny this morning, who died of a particularly aggressive cancer of the blood. I had not mentioned this to you all because there was so much else bad going on in the world, but over the past few months she had developed bleeding tumors all over her body, and twice had to have surgery to remove them. This is a particularly nasty cancer that does not respond to chemo or radiation, and Ginny quite never got over the second surgery, and even as she was recovering more tumors were appearing.

Harry, our family vet, came over and helped ease Ginny out of her pain this morning, and suffice it to say mom and dad are devastated, so keep them in your thoughts. It’s hard to imagine life without Ginny- she was just such a big presence crammed into a tiny little body, with dozens of personality quirks that made her an absolute delight to know.

She will be very, very missed.

END_OF_DOCUMENT_TOKEN_TO_BE_REPLACED

Justice Ginsburg is the first female U.S. government official to lie in state at the Capitol.

VP Biden and Senator Harris are there, according to Rabbi Lauren Holtzblatt, who is officiating now. Open thread.

END_OF_DOCUMENT_TOKEN_TO_BE_REPLACED

Justice Ginsburg arrived at the U.S. Supreme Court for the last time a little while ago.

On Friday, RBG will lie in state at the U.S. Capitol, the first female government official ever so honored.

ETA: Do any of the blog’s battalions of attorneys have an opinion on this proposal published in Slate? It’s not easy to sum up, but the author, Christopher Jon Sprigman, argues that Congress should use its Article III powers to limit courts’ jurisdiction, including the U.S. Supreme Court.

END_OF_DOCUMENT_TOKEN_TO_BE_REPLACED

Senator McConnell has placed his marker on the table. 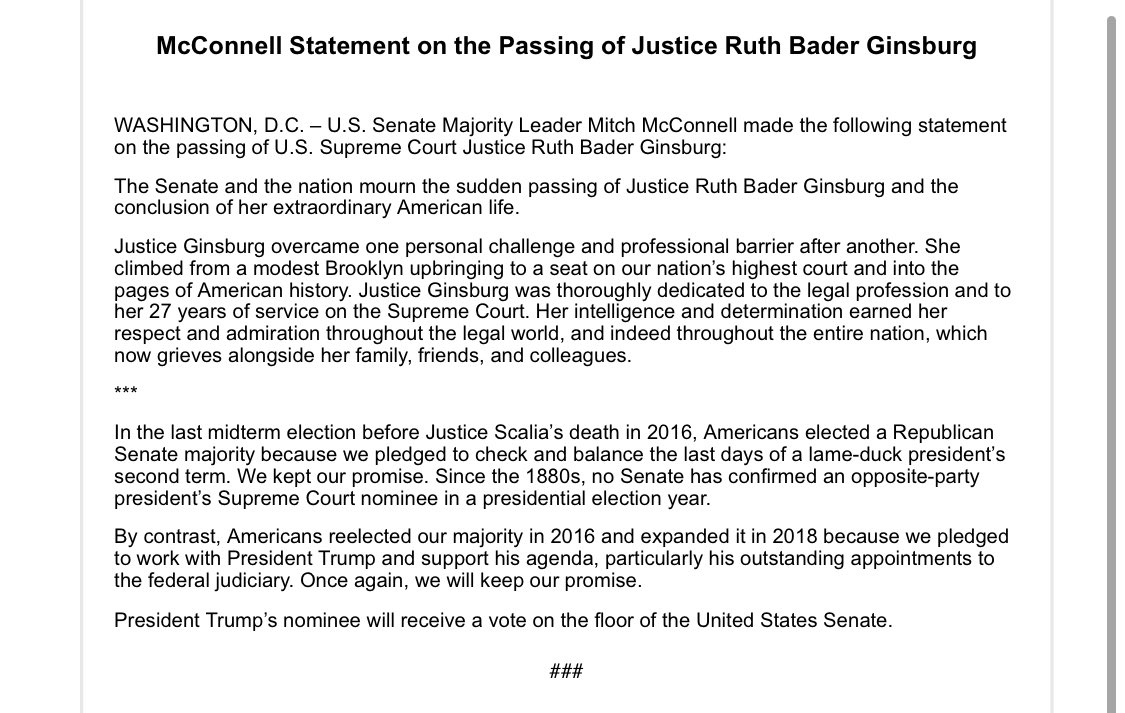 ABC news is reporting that the President will announce his nominee shortly.

BREAKING: Pres. Trump is expected to put forth a nominee to fill Ruth Bader Ginsburg's seat in the coming days, multiple sources close to the president and with direct knowledge of the situation tell @ABC News. https://t.co/NpSSjiSOLo

I expect that the President will announce his nominee no later than Wednesday and that Senator McConnell will have that nominee up for a vote before the full Senate no later than the Wednesday after that so that the new justice can be seated before the Supreme Court starts its new term in October. And to try to do sort of a judicial nomination shock and awe campaign by moving so quickly that no one can respond to what McConnell is doing.

I’ve seen Senator Murkowski’s statement, and it was nice to read, but the simple reality is that for Senators Collins, McSally, Gardner, Tillis, and Graham it is ride or die. They cannot let go of the tiger that is the President and his base at this point because it will not get them the Democratic votes to either save them in the case of Collins, McSally, and Gardner, nor to open up their reelection campaigns from the statistical ties that Tillis and Graham are in. Abandoning the President and his base of supporters on this will cost them more support and votes, then trying to look like they’re standing on principle.

I just want to clarify and elaborate a bit on what I think is likely to happen. I expect that the violence directed at senators will come from the hard core and extreme right. It will be directed at the Republican senators who are being reported as potentially not supporting the President and Senator McConnell on confirming a new justice before the election and the inauguration; Gardner, McSally, Collins, Murkowski, Romney, Graham, Grassley, and Alexander. It will start with threatening emails, voicemails, and direct messages. And it may escalate to actual attempts at physical intimidation to send a message: get or stay in line or else… Similarly, I expect that violence between Americans will originate from the same direction. Some MAGA asshole will decide to gun his car through a vigil being held in memory of RBG or a demonstration and rally to demonstrate to Senator McConnell and his GOP majority that they have to abide by the rules McConnell established in 2016. Or that, as we’ve seen with the MAGA truck/vehicle rallies in Portland, that those supporting the President will show up and pepper spray and paintball those standing vigil for RBG or rallying to pressure McConnell and his GOP majority to not be hypocrites. This violence will be stochastic terrorism, but if it happens, I expect it will originate on the hard core and extreme right.