You are here: Home / Archives for Politics / Politicans / Woman in the Whitehouse 2016

Woman in the Whitehouse 2016

Another (extremely grudging!) vote for HRC…

Trump and Bannon turned over every slimy rock in America, hoping to find one more loser for their army under the guise of patriotism. /9

Every Trump operative, every pundit, every idiot who wore a MAGA hat was complicit in the most dangerous campaign since the Civil War. /12

In other words, Trump and his lunatics have left me with no choice: I will have to vote for Hillary Clinton. /17x

But then… yeah, nutpicking — when this is today’s GOP:

@wikileaks – America owes you, bigly! Thank you and God bless you! pic.twitter.com/gvElqdeiOa

END_OF_DOCUMENT_TOKEN_TO_BE_REPLACED

So tonight is the annual Alfred E. Smith Memorial Foundation Dinner, one of those anodyne quasi-political events which become news only in years when the politics are particularly inflamed. Since His Eminence Cardinal Timothy Dolan is a notorious trimmer who, some people say, was rewarded by Pope Benedict with the plum NYC residency for hiding Church assets from lawsuits by survivors of clerical abuse, and who has since made a prominent pest of himself encouraging hardcore fellow Talibangelicals to resist civil laws protecting reproductive rights and same-sex marriage, reportorial hopes are high for this year’s event. Per the NYTimes:

… On Thursday night, Hillary Clinton and Donald J. Trump will appear together again for a ritzier gathering, delivering remarks at the white-tie Al Smith charity dinner at the Waldorf Astoria in Manhattan.

In most presidential campaigns, the dinner, which benefits Roman Catholic charities, functions as a welcome respite, a forum for levity and self-deprecation in the throes of a heated election.

This year’s may be more complicated.

Convened less than 24 hours after the caustic final debate on Wednesday, the event would appear, on paper, to be nothing less than a high-society nightmare for Mr. Trump…

Which reminded me that I wanted to share a remarkable Gail Sheehy article from back in 2000, a Vanity Fair piece on a related NYC event, “When Hillary Clinton and Rudy Giuliani Did Battle for a Senate Seat”:

Tonight is Rudy’s night. It is the annual New York spectacle known as the Inner Circle, where reporters skewer the mayor in cute, amateurish skits, and Hizzoner has the chance for rebuttal with his own skit. Since nobody upstages Rudolph Giuliani, his will be a Broadway-class show, perhaps his final bravura performance before November 2000, when he hopes to be turned out of the mayor’s office by virtue of his election to the United States Senate.

This evening, however, the ravening city media corps is not his chief target. Instead, it is Hillary, formerly Hillary Clinton. The two have been circling each other with the wary menace of prizefighters in the opening round, but it’s been a year now, and still they have not been in the same room. Tonight’s spectacle at the Hilton in midtown Manhattan has drawn an unusually large crowd, 1,300, including poohbahs representing every fissure in New York’s unstable political ground. They are all packed into the grand ballroom, hoping to witness the combatants touch gloves for the first time.

Enter the First Lady, looking like Cleopatra in full regalia, gowned to the floor in a pyramidal coatdress of black satin. Her neck is girdled in a collar of jewels. Her golden hair, swept high, shimmers. Most often, the whispers in her wake these days are beautiful. This is a woman who for many of her 52 years never cared a fig about her appearance, but in the chrysalis of transformation from political wife to independent woman, the jawline has been chiseled, the dominatrix eyebrows weeded, the weight dropped, and the result is a woman who obviously enjoys for the first time being called beautiful. Three old birds, Democratic regulars who refer to themselves as jaded, admitted after seeing Hillary speak in a suburb of New York, as one of them put it, “We weren’t prepared to be impressed, and we are impressed. First, the physical package. The polish. I would kill to get ahold of her hairdresser and makeup person. Kill.”…

Tonight is yet another rite of passage for Mrs. Clinton. A woman of grand ambition whose original choice was to channel her political aspirations through her naturally gifted husband, she is stumbling through the learning stage of candidacy for elective office. No out-of-town tryouts. She’s opening in New York.

For the first half of the interminable evening she watches the press show, Livin’ la Rudy Loca, where the mayor is called Mr. Mean, but the gags about her are meaner. The Hillary character jumps on a subway to Shea Stadium, “where I can watch my favorite team, the New York Yankees!” When an annoyed straphanger educates her that the Yankees play in Yankee Stadium, the Hillary character trills, “We live in Chappaqua now, you know. That’s Indian for ‘The Land of Separate Bedrooms.’ ” Necks swivel in unison toward Table 28. She’s laughing! Then she’s hit with the lyrics “If she could handle Monica, would Rudy cause her pain?” Heads whirl toward Table 28. “How does she look?” “Wan.” In a skit where the Hillary character is jailed by the Mayor Giuliani character, she finds herself sharing a cell with Sean “Puffy” Combs and his girlfriend, Jennifer Lopez. Bill Clinton shows up with “soft bail money,” but instead of springing his wife, he feels Jennifer’s pain and strolls off arm in arm with the halfnaked songstress.

Before Round Three begins, one of the mayor’s men approaches Hillary’s press secretary, Wolfson, and asks to take the First Lady backstage. “Why should she go backstage?” snarls the handler, a stain of fear spreading across his formal shirt.

Backstage, Hillary again approaches the unsuspecting mayor from behind and delicately lays a hand on his shoulder. He turns around. She faces him down with flattery. “Well, I hear you’re the real star.”

Her charm offensive seems to rattle him. When Rudy’s smile is forced, the lips turn down, and his deathly white face resembles that of the Phantom of the Opera. Regaining his edge after she leaves, he gets off a few sarcastic remarks to reporters: “I’m very, very encouraged at the fact we’re drawing lots of out-of-towners to this performance of mine.”

But it is Hillary’s star power that radiates to every corner of the ballroom. New York bigwigs, such as financial-media impresario Michael Bloomberg, attorney and labor mediator Theodore Kheel, and District Attorney Robert Morgenthau, crane to see her. An informal receiving line forms three-deep around her table. Powerful men who might be expected to support the mayor but who cannot get a phone call returned from him are drawn to meet Hillary. One is Harold Levy, the interim New York City schools chancellor, who is about to be slapped down by the mayor for daring to work out incentives with the teachers’ union to avert a crisis in the city’s summer-school program; his crime, failing to recognize the real schools chancellor—Rudolph Giuliani. Another enemy the mayor can’t afford, Michael Long, chairman of the Conservative Party of New York State, waits his turn. The tall, hefty man with a kindly Saint Bernard face holds a minimum of 350,000 votes in his pocket, but Giuliani won’t talk to him. They sat down nearly a year before, and Long told the mayor his party was open to considering an endorsement. By summer, when Long hadn’t heard back, he joined with New York governor George Pataki, who at the time was said to be unofficially promoting the candidacy of Rick Lazio, a young and likable Long Island congressman. “I told the mayor, ‘Don’t take it personal,’ ” Long recalls…

Just in case you might be wondering why Giuliani seems to be taking his attack-dog role as Trump surrogate… so personal.

END_OF_DOCUMENT_TOKEN_TO_BE_REPLACED

…and damn proud of it.

I missed that exchange because life got in the way (had I not intervened, there would have been blood)

This “nasty” woman (that’s Miss T, if you’re nasty) will be proudly casting her vote for Hillary Clinton tomorrow. END_OF_DOCUMENT_TOKEN_TO_BE_REPLACED

This debate, much like the campaign itself, is over. Clinton has won and Trump has lost bigly

Best summary I’ve seen so far, from our own Adam:

If the postmortems pick just one ‘worst moment of the third debate’, I’m assuming it will be Trump declaring (more than once! Wallace tried to give him a do-over!) that if he lost the election, he’d “see how it looked at that moment”, rather than saying, yes, he’d accept the results.

Which is, of course, the next step beyond his announcement during the last debate that, should he win, his opponent “will be in jail.”

John King: I was getting emails from Republicans in swing states saying "OMG" when Trump refused to say he would accept poll results

Ivanka Trump says her father will concede if he loses https://t.co/N136ALrlT2 pic.twitter.com/7MEqP4NfCb

END_OF_DOCUMENT_TOKEN_TO_BE_REPLACED

Tikka has decided to make his views on this election absolutely clear:

I don’t know about y’all, but I can’t take another debate.  My spouse and son will be glued to the set while I’ll be at a bar with a friend in the science museum business.  We’ll talk shop, mostly ignore the baseball game, and, for my part, try to weigh the pros and cons between bourbon and rye. (Cue the inevitable soundtrack.)

Tikka’s done my thinking for me, and I don’t need any more exposure the Cheeto-Faced Ferret-Heddit ShitGibbon, thank you very much.

PS:  An alternate view: Tikka knows (as many Democratic candidates seem not to) how to engage the camera:

END_OF_DOCUMENT_TOKEN_TO_BE_REPLACED

(Thanks to beloved commentor SiubhanDuinne)

I’m a big fan of ‘Keep Calm and GOTV On’, myself, but if anyone in your social-media circles needs scary stories to stay motivated…

A Likely Victory Is By No Means A Certain One https://t.co/TLR4m2COqP via @athertonkd

Apart from encouragement both positive and negative, what’s on the agenda for the day? 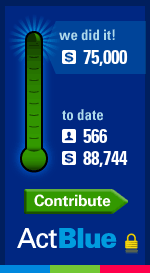 END_OF_DOCUMENT_TOKEN_TO_BE_REPLACED

“If you vote for someone other than Hillary, or if you don’t vote at all, you are helping to elect Hillary’s opponent”
.

What’s on the agenda as we start another countdown week?
.

Something to make you feel good about the world for once. https://t.co/qK8zX0uYCI

Less than 40 mins after going public, we met our goal and then some! Thank you all for showing that Americans are thirsty for civility and decency, and that we love our democracy above all our differences.

If you came in order to make a donation, might we suggest contributing to a North Carolina classroom through DonorsChoose?