You are here: Home / Archives for Political Fundraising

I will leave the thermometer up until morning so everyone can see that we reached our goal!  Blew past it, in fact.

But Gravenstone, aka Balloon Juice Angel #8, has match money left, so if you still have money to chip in, we have some new rules for the home stretch!

Balloon Juice Angel #8 will match donations of any amount until the $      $68  of his remaining match money has been met.  The only detail is that you need to tell us your donation amount in the comments.

Like a train speeding toward it’s destination, Balloon Juice has proven in the past couple of years to be an unstoppable force in our fundraising efforts to turn back the tide in this country, as we fight for ourselves, for our country, for our loved ones, fight to give help give voice to people who many others want to have no voice at all.

Whether you had just one dollar to contribute, or a whole lot more dollars than that, whether you posted the thermometer link in your twitter feed, whether you encouraged this effort in your comments… we are not giving up, we are fighting for the world we want to have, and we are doing it in our own unique way.

Along those lines, here’s a great train song sung by 3 very different voices. I like to think that Steve Goodman, Arlo Guthrie, Pete Seeger and others would be proud of our efforts.

Thank you to everyone who has joined in this effort to help give a voice to Native people.  In Georgia.  In Arizona. In Wisconsin.

Now let’s spend the last $583 of Gravenstone’s match, shall we?

END_OF_DOCUMENT_TOKEN_TO_BE_REPLACED We have had 6 Balloon Juice angels 🕊, and angel #6 🕊 has added his match amount in the Four Directions Wisconsin Native vote thermometer!

That’s a lot!  Thank you so much to our Balloon Juice angels 🕊, to everyone who has donated, and to every person who has provided support and encouragement.

With $7,000 more in Balloon Juice donations, we can raise a total of $75,000 to give the Native vote a major boost in Wisconsin.

Our efforts will help give a voice to a people whose collective voice has long been denied.

Because of what we’ve accomplished already, Four Directions now has firm plans for early action in Wisconsin that they did not have before – that they could not have without us and without the double-matchers. $54,000 for early planning, early hiring, early organizing.  We should celebrate that!

Just $7,000 more gets us to our goal of $25,000 for early efforts in Wisconsin – $75,000 with the double-match – and with that amount Four Directions can ramp up their Native vote efforts more quickly and more broadly.

We can do this!  We can help remove the obstacles.

We’re 3/4 of the way there – and there are nearly 2 weeks left in November – let’s keep up the momentum!

Every dollar you donate is double-matched.  Just multiply your full donation amount by three, and that’s how much goes to the Native vote effort for Wisconsin.  You are welcome to list your donation in the comments to inspire others, but every dollar with no upper limit gets multiple by 3.

Anyone want to share why this particular effort is important to you?

END_OF_DOCUMENT_TOKEN_TO_BE_REPLACED

November is National Native American Heritage Month.  You can read more about it and see the schedule of events here.

Every donation of any amount is double-matched by external donors.  Just multiply your donation by 3 to know the amount that will go to Four Directions – Wisconsin.

We also have two more $1,000 BJ Angel Matches for the Wisconsin Native vote!  You know who you are, and you are doing a wonderful thing for Four directions and for your fellow BJ peeps.

Up to $50 can be matched per person with this BJ angel match.  Just mention your donation in the comments to get the angel match in addition to the double match.  If you do the angel match, donations of $50 or less can be multiplied by 6 to see the amount that will go to Four Directions – Wisconsin.

Even if you donated with one of the previous angel matches, this is from a new angel so you can be matched again up to $50, if you like.

All the details for the Four Directions – Wisconsin fundraising are in the first post.

END_OF_DOCUMENT_TOKEN_TO_BE_REPLACED We have two $1,000 BJ Angel Matches this morning for the Wisconsin Native vote!  You know who you are, and you are doing a wonderful thing for Four directions and for your fellow BJ peeps.

You guys are amazing!  You donated $6,000 in the thermometer last night + and we have a $1,000 paper check that also counts but does not show up in the thermometer.  Shoutouts to anonymous BJ Angel #1 and BJ Angel #2, David Fud and everyone else who are making this happen.

All the details for the Four Directions – Wisconsin fundraising are in last night’s post.

Up to $50 can be matched per person with this angel match.

Even if you donated with one of the angel matches last night, this is a new angel so you can be matched again up to $50, if you like.

Let us know about your donation in the comments in order to get your match.

END_OF_DOCUMENT_TOKEN_TO_BE_REPLACED

Starting a new fundraising campaign right on the heels of another one may seem the like a questionable choice.

But in this case it’s exactly the right time, and I’ll tell you why.

Well, okay, maybe not a great time for us and for our pocketbooks.  We just finished the fundraising for Arizona, after all.  And we got rid of the ads.  Can’t we take a breath?

Not unless we want to to take a pass on the chance to have a monumental impact on what happens in 2022.

Four Directions has identified 4 key states for 2022.  Georgia, Arizona, Nevada, Wisconsin.  (Michigan is #5, depending on resources.)

In December, just a few weeks from now, FOUR DIRECTIONS will be making decisions for 2022 – where they will go and what they can do.

I knew when Four Directions approached us with the double-match that I wanted our money to go to AZ.  11 electoral votes.  A voice in Mark Kelly’s senate race.  A voice in whether we keep the senate.  A voice in a close governor’s race.

When I spoke with Four Directions last week, I mentioned that I thought we would want to support Wisconsin next.  I was thinking maybe February or so, and  I asked if they could find a match us for $25,000 for Wisconsin – maybe even a double-match since that worked so well for AZ.

They found a match for us for Wisconsin!  A double-match!

But February fundraising is too late for their December planning for 2022.  And early planning influences outcomes.

. (match closed at 10pm, another BJ angel match will start with a new post in the morning!)

Just as before, up to $50 can be matched per person with the angel match.  Let us know in the comments in order to get your match.

Once we raise these funds for Four Directions in Wisconsin, DougJ will start rolling out some House candidates.

If we can raise this $25k now – turning that into $75,000  with the double-match – Four Directions can add WISCONSIN to their plans for early money and early energy.

We have 21 days left in November.  We know it’s asking a lot, but can we do this one more time?

This will be our last high-dollar fundraising effort until after the holidays.
.

END_OF_DOCUMENT_TOKEN_TO_BE_REPLACED

Our $25,000 gets double-matched, so if we can make it this last mile, Four Directions will receive a total of  $75,000!  At least $50k will be used specifically in AZ, and the remaining $25k may be used in AZ, or it may be used in Georgia, Nevada, Wisconsin or Arizona.

Our funding is going to make a huge difference in AZ.

Mark Kelly is an excellent senator, there will be a close AZ governor’s race next November, and registering as many as possible of the 235,000 unregistered potential Native voters could be a game-changer for a big Democratic victory in AZ just one year from now.

You guys stepped up in a big way to get us to a good place for going ad-free, so we are aware that timing is not perfect, but we are still hoping we can make it over the top for AZ in the next day or two.

If you’ve already given what you comfortably can give, then please don’t even think for a minute about trying to do more for AZ.

But maybe there are still some folks who have been intending to contribute to Arizona?  Can we do this?

Four Directions worked in AZ in 2018 and in 2020, and they are now ‘reanimating’ people who worked with Four Directions directly in the past.  Voter registration gets started in January or February.

Because of our fundraising and the double-match, they are laying the groundwork right now and are starting to recruit and train people to be team leads in AZ, and the are developing the protocols that will be the foundation for the work in AZ in 2020.

END_OF_DOCUMENT_TOKEN_TO_BE_REPLACED

First of all, let’s raise a little more money for Four Directions in Arizona: 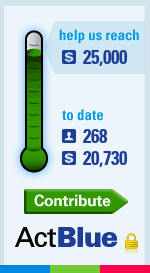 Then, please help me come up with a name for Bari Weiss’s new “university” in Austin. So far I’ve got Glenn State and William and Bari. Other ideas?