I want to post a quick follow-up after our conversations with Four Directions at the Q&A and on the zoom.

We had a good turnout last night, just over 20 people.

Balloon Juice never fails to amaze.  When we have fires out west, we have a jackal who is a fire chief.  When we’re talking about a virus, we have a virologist.  When we’re figuring out how to teach from a distance, we have an expert in that.

Last night, we had multiple jackals at the zoom who have contacts in the legal profession in the area of tribal law that they offered to share with the folks at Four Directions who are involved in litigation.

The four initial states FOUR DIRECTIONS are committed to for 2022 are: 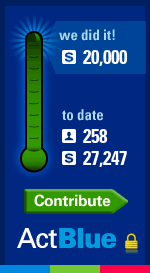 With a successful “match” campaign this month, these four additional states could be added as target states for 2022:

Someone at the zoom last night suggested that we put the thermometer in the sidebar during the remaining 5 days of their match campaign, and lots of people thought that was a great idea, so there it is.