You are here: Home / Anderson On Health Insurance / Copper plans in the ARA world?

A few days ago, we highlighted the annual spending distribution among percentiles of the population.  As we all know, healthcare expenditures have an extreme right hand skew: 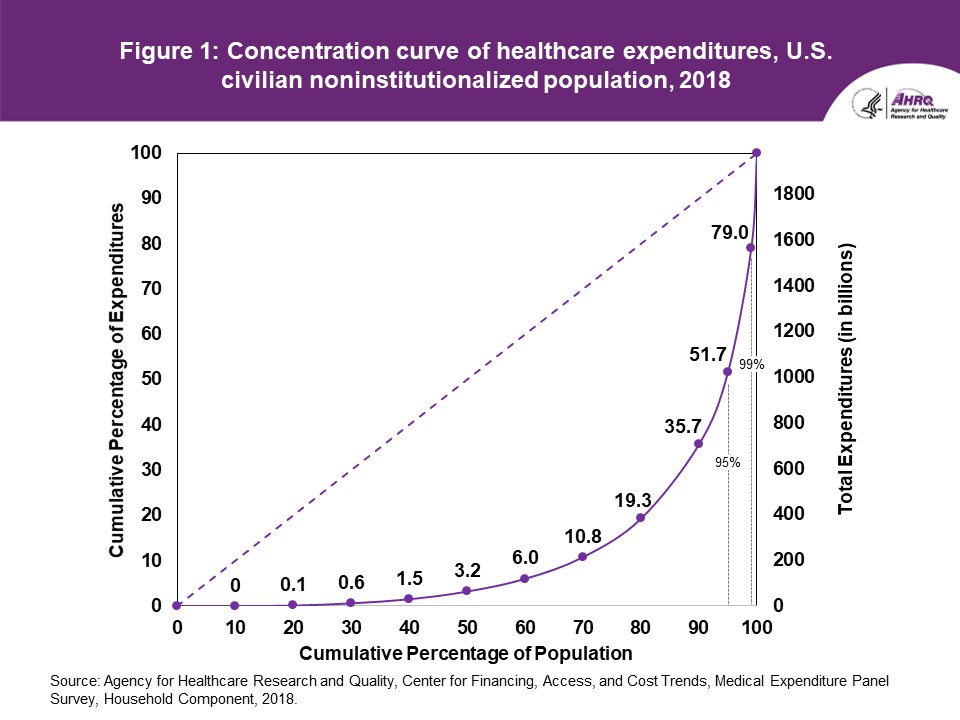 In any given year, half the non-institutionalized population is barely touching the medical system. From a health insurance policy point of view, these folks are likely to be benefit design indifferent as either they are not using any services so no theoretical cost sharing applies, the few services that they do use are already exempted from cost-sharing (flu shots) or the plans that they are offered have high enough cost-sharing that the difference between a $500 deductible and a $5000 deductible is completely theoretical retrospectively.

Yesterday, I was chatting with my fellow nerds, and the idea of a wide variety of “copper plans” came up. In this context “copper plans” can be several different things but fundamentally, it is the introduction of a low actuarial value plan with a wicked high deductible and relatively low premiums aimed at price sensitive buyers. Colorado had proposed, in 2018, an ACA waiver to allow the state to sell Catastrophic plans that cover 3 primary care visits and nothing else until a patient hits the deductible which is the maximum allowable out of pocket expense.

Plan premiums are effectively composed of three parts. The first is administration and overhead. Some parts of A&O are relatively scale independent such as the cost of having an actuary run the modeling to price a plan and some costs are scale dependent such as the number of claims to be paid or the number of customer service reps needed. The second part is claims experience. How many and how expensive are the claims that the covered population generates. The final part is risk transfers in the form of reinsurance premiums going out and reinsurance claims coming in as well as risk adjustment transfers.

Right now, Bronze plans are almost always net risk adjustment payers. Bronze plans are wicked attractive to healthy people who are buying only on premium. In a new working paper with Coleman Drake, Sihting Cai and Dan Sacks, we show that a significant chunk of the Colorado exchange buying pool is just buying the cheapest plan available to them. Copper plans would be viable for this population that is looking for the cheapest possible hit by a meteor coverage. Bronze plans are also attractive to older individuals who know that they have massive medical expenses (2018 data for Healthcare.gov here).

If we were to introduce a Copper plan with a 50% actuarial value with deductible somewhere between $12,000-$14,000 for a single individual, we can make some assumptions about enrollment and premiums. First, this plan will be less expensive than a minimum 61% Bronze plan. Premiums will be lower. However, they won’t be 18% lower.

Right now, a significant chunk of Bronze premiums don’t pay for claims generated by people buying Bronze plans. Instead, they go out the door as risk adjustment transfers to help pay for the claims generated by people buying Silver, Gold and Platinum plans. Bronze plans cross-subsidize the premiums of people who buy higher actuarial value plans. Copper plans that are in the same risk pool would do the same.

So we’re probably looking at modest premium reductions relative to Bronze in a world where most people are subsidy eligible. We know that zero premium plans are proliferating with the expanded subsidy table of the American Rescue Act so it is very likely that zero premium copper would go further up the income scale than zero premium Bronze currently does.

For most people, in a subsidy eligible world, Copper offers dirt cheap premiums and massive exposure. Most people who would look at Copper have private information that indicates that the odds of them having medical expenses greater than $8,000 in a year (about where Bronze starts capping out) is really low. We would expect some movement out of Bronze of people who know that they have massive claims for next year into Copper as well but given the new subsidy table, this is a harder decision to make now. We would expect a massive barbell distribution of claims spending. A lot of people will have absolutely no claims and very few people will have massive claims.

From a choice perspective, anyone who is exposed to a same insurer/same network zero premium bronze or higher plan should not go to copper. This basically means these plans would be primarily aimed at folks earning well over 250% and usually over 400% FPL. I think that there is enough people who are relatively healthy and who have enough liquid assets to pay a $12,000 deductible in the case of a cancer diagnosis that there might be some interest in increasing the choice menu to allow for a lower premium but higher cost-sharing product. But again, the premium reductions will not be 1:1 for the reduction in actuarial value and the increase in risk.