You are here: Home / Anderson On Health Insurance / Where we have been and where we are going

In the first week of May,  I argued that that we bought a lot of health with systemic social distancing and mobility slow-downs:

physical distancing bought at least four doublings avoided. And that probably means we bought the hospitals a chance in hell of not being overwhelmed.

April bought learning from both overwhelmed hospital systems in metro New York City as well as from systems that are not being overwhelmed. New techniques and procedures are being tested, evaluated and disseminated to clinicians who have enough time and mental energy to learn instead of fighting fires with a garden hose.

We’re going to be cashing in those earnings right now.

Rt.Live tracks the (R)eproductive Rate of the virus in each state.  An R above 1.0 means the epidemic is growing as one person newly infected will infect more than one person on average by the time that they cease to be infectious.  An R below 1 means it takes multiple people to infect one new person and thus the epidemic will shrink.

Below is a four screen image of RT.Live as of last Friday and 1, 2, and 3 months before: 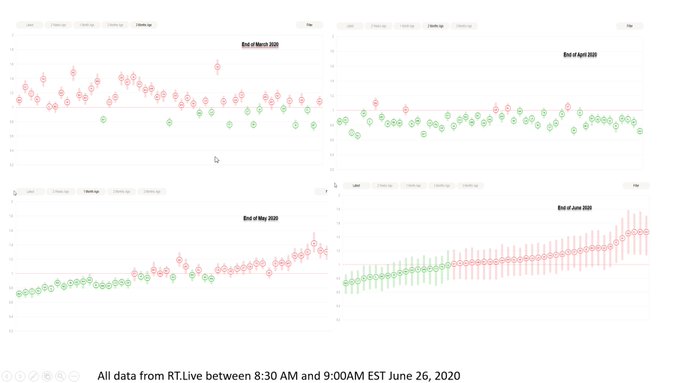 My colleagues at CovidExitStrategy.org have looked at how states have been approaching the re-opening gating criteria laid out by the White House from late May to this weekend.

We had achieved success in suppressing disease spread by late April and testing had been ramping up throughout May.  And now most of the country excluding the metro NYC area and New England is on fire.