You are here: Home / Anderson On Health Insurance / Active purchasing and state choices

Pennsylvania is moving towards running their own state based marketplace (SBM) for their individual market.  They are launching this fall with coverage going live on 1/1/21.

ACA marketplaces can either be “clearinghouses” where the exchange just makes sure every plan offered meets minimum federal and local requirements or “active purchasers” where the exchange curates the choice list to achieve some state specific objectives.  Healthcare.gov is a clearinghouse, while Covered California is a notable active purchaser.  These two exchange models have very different objective functions and outcomes as shown by Krinn et al in a 2015 Health Affairs article.  I reworked their Table 3 for clarity. The SBM-A(ctive purchasers) optimized for big spreads to benefit subsidized individuals. 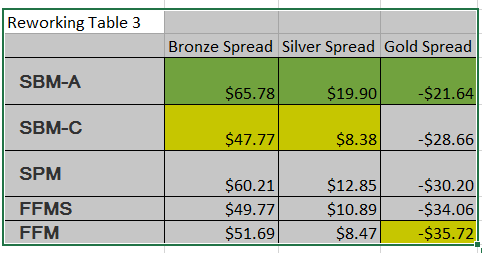 The Pennsylvania marketplace will be an “active purchaser” model (slide 36).

Pennsylvania under Governor Wolf (D-PA) has been aggressive in optimizing Pennsylvania insurance markets to increase affordability for the subsidized population.  Pennsylvania aggressively pushed for Silverloading and Silver Switching.  However there are limits as to what the state can do when it was on Healthcare.gov.  Some insurers, most notably my former employer, UPMC Health Plan,  offered many mirror image silver plans that crushed the premium spreads in counties that could have supported a big gap strategy.

Healthcare.gov’s operational staff could not care about that strategy as long as the plans that got loaded met state and federal regulatory requirements.  An active purchaser exchange may be able to care about that strategy in monopoly markets.  The exchange wishes to maximize competition in order to drive down gross premiums even at the cost of driving up subsidized net premiums, but in regions where there is little to no competition, active management can improve the well being of everyone involved without trade-offs.

As more states move to their own exchanges, we should expect to see states to make different choices as to who they prioritize and how they do so.  The choice to move to an active purchaser model opens up a continuum of possibilities and it will be up to Pennsylvania and other SBM states as to how they use the expanded toolbox.

Previous Post: « Tuesday Morning Open Thread: Let Her Example Be Our Inspiration
Next Post: Stupidity, hatred, love and courage in India…and everywhere else »