Trump is working harder to find a sporting event he’ll get cheered at than he has on any piece of legislation ever https://t.co/VqhwU6Rm43

The man is a plague. #LSUvsALA

Toward the end of halftime, a group of students stood & cheered while wearing shirts that spell out IMPEACH pic.twitter.com/3s4FuZp1Zo

This is Trump’s third sporting event in 3 weeks.

At the World Series in DC, he got loud boos & chants of “Lock him up.”

At a UFC fight in NYC, he got chants of his name, boos and middle fingers.

And at today’s Alabama football game, he got cheers, “USA” chants—and some boos.

Yes, Trump got cheers at a football game in Alabama, the state that almost elected a serial child molester as senator.

According to the UN: Alabama has the worst poverty in the developed world. 15% of residents are illiterate. 6th worst state in healthcare. That’s @realDonaldTrump’s “real America” https://t.co/HpFIfPBlsX

The famous Baby Trump balloon has been stabbed and deflated in Alabama. The popular protest symbol was floating among football fans at a game, when a man stuck a knife in it and ran off. He was later arrested.

President Trump posted 82 tweets or retweets today and flew 1,600 miles roundtrip to Alabama for a football game in desperate search of applause. #HardlyWorking 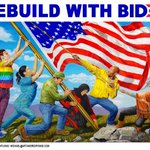