You are here: Home / Politics / America / The Truth, the Wohl Truth, and Everything But the Truth: The Jacob Wohl Story

Jacob Wohl is the Carter Page of Jim Hofts. Bless his heart!

Wohl also appears to have set up a company, Potomac Intelligence, to use in the scheme, complete with fake LinkedIn pages. Minutes after I called him and Burkman, the website was taken down, the LI pages deleted, and both its phone numbers disconnected https://t.co/9RDYOe5aAw

From The Daily Beast (emphasis mine):

A pair of right-wing provocateurs are being accused of attempting to recruit young Republican men to level false allegations of sexual assault against Democratic presidential candidate Pete Buttigieg.

The details of the operatives’ attempt emerged as one man suddenly surfaced with a vague and uncorroborated allegation that Buttigieg had assaulted him. The claim was retracted hours later on a Facebook page appearing to belong to the man.

A Republican source told The Daily Beast that lobbyist Jack Burkman and internet troll Jacob Wohl approached him last week to try to convince him to falsely accuse Buttigieg, the mayor of South Bend, Indiana, of engaging him sexually while he was too drunk to consent.

The source who spoke to The Daily Beast said Burkman and Wohl made clear that their goal was to kneecap Buttigieg’s momentum in the 2020 presidential race. The man asked to remain anonymous out of a concern that the resulting publicity might imperil his employment, and because he said Wohl and Burkman have a reputation for vindictiveness.

But the source provided The Daily Beast with a surreptitious audio recording of the meeting, which corroborates his account. In it, Wohl appears to refer to Buttigieg as a “terminal threat” to President Donald Trump’s reelection next year.

On Monday, a separate individual using the name of Hunter Kelly published a post on the site Medium in which he alleged that Buttigieg sexually assaulted him in February. That post was tweeted out by David Wohl, Jacob’s father, and quickly re-written by the site Big League Politics, which is known as a landing ground for right wing conspiracy theories.

The Daily Beast reached out to Kelly on a cell phone listed to him in the student directory at his  Michigan college. Told we were reporting on apparent efforts by Jacob Wohl and Jack Burkman to drum up false sexual assault allegations against Buttigieg, Kelly replied, “I was unaware this was happening. But yes it is true.”

Kelly wrote that he did not control the newly-created Medium and Twitter accounts that posted the allegations under his name. When asked if he could verify his identity, he texted the Daily Beast a selfie that matched the photo seen on Medium and on Kelly’s longstanding Facebook accounts.

“Here is a selfie of me, sorry I have been crying,” he wrote. “Today and the promises made didn’t go as planned.”

Kelly declined to provide more details. But two hours later he posted a message to his Facebook timeline headed, “I WAS NOT SEXUALLY ASSAULTED.”

“It’s important for everyone to know that I was not sexually assaulted and would never falsely accuse anyone,” he wrote. “To keep it brief for now, I was approached by a political figure to come to DC to discuss political situations from the standpoint of a gay Republican. When I arrived they discussed Peter Buttigieg and started talking about how they would be working a campaign against him.”

“I went to bed and woke up to a fake Twitter @RealHunterKelly and an article that I in no way endorsed or wrote. I have since left and am working on a formal statement to give to everyone including the Buttigieg family.”

Wohl’s dipshit dad, who is both a lawyer who should know better and was a major 2016 on air surrogate for the President and his campaign on cable news, also got in on the stupidity.

Shonda – the Wohl lot of them!

Wohl is currently under investigation for making false police reports in Minneapolis during his fact finding expose with Laura Loomer and Ali Alexander and the world’s tiniest body guard* to bring the truth about Congresswoman Omar to light. Wohl faked death threats against himself and then provided them to the Minneapolis Police Department. Let me just restate that: Jacob Wohl sent himself fake death threats, reported them to police and provided evidence of the fake death threats, in the hope that the Minneapolis Police Department’s investigation into Jacob Wohl’s attempt to assassinate himself would somehow expose Congresswoman Omar having done something.

Back in March I wrote that the 2020 election cycle was going to be an information war. I’m going to add something to that assessment, which holds up pretty well as every one of the five lines of attack have been hit since the attack on the synagogue on Saturday. Specifically, every single Democratic campaign, the DNC, the DCCC, the DSCC, and the various organizations and groups – from think tanks to unions to advocacy organizations – all need to establish counter-influence operations teams ASAP!!!! A failure to do so should be seen as malpractice. 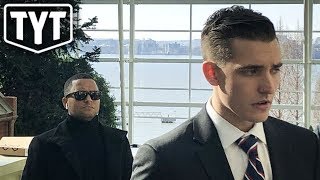