You are here: Home / Guest Posts / Now For Something Completely Different: Across The Pond 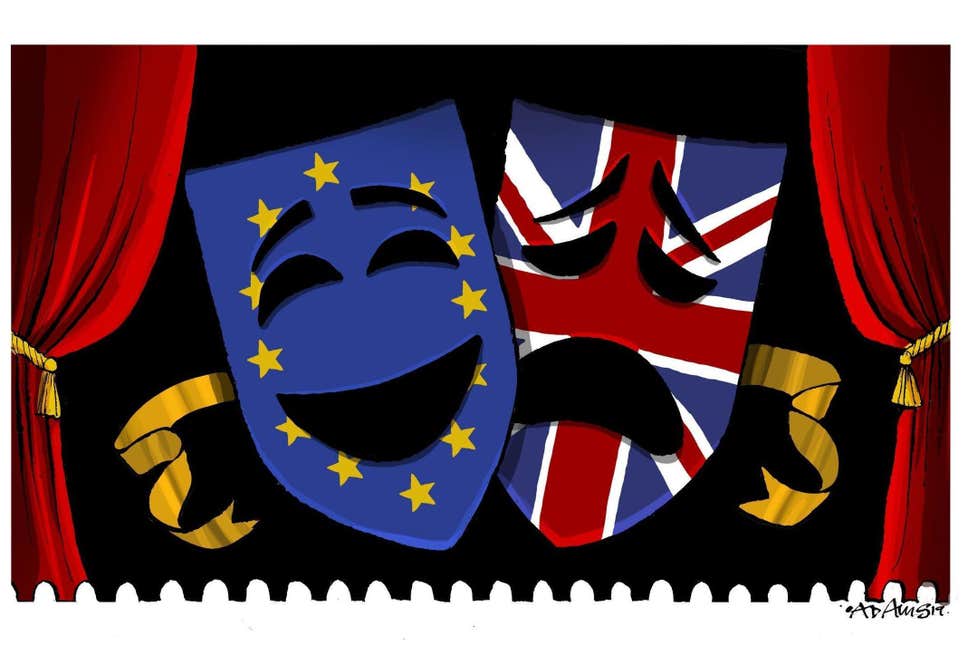 In a thread this morning, Tony Jay broke down the latest on Brexit for us so well, I had to front page it:

Oh it’s all going off now, isn’t it? Brexit, that genius plan to turn the United Kingdom into a bigger, juicier Bluestar Airlines en route to going full-on Airstrip One has hit a tiny, wee stumbling block. Turns out that Parliament, that wacky bunch of grey-suited mavericks and jobbing Executive Vice-Presidents for Arranging Contracts and Dat while Golfing, have decided that they don’t too much fancy the very likely prospect of being roasted for their meat by dispossessed proles in the smoldering ruins of Chipping Norton Conservative Club and would quite like to, maybe, I don’t know, exercise a bit of that ‘Parliamentary Sovereignty’ all the Leavers were banging on about non-stop back in the days when being humiliated and sent home from European capitals was more the preserve of our national football teams than our national government.

In a vote last night on an amendment put forward by Regency beau and racist jelly-mold Oliver Letwin a majority of Parliament chose to push the Government aside and hold a series of indicative votes on other options. Things like Revoking Article 50 (Brexit is sent to bed with a cup of hemlock), having a straight 2nd Referendum (Brexit has to re-apply for its job), a Norway style semi-membership (Brexit pops on a Viking helmet and is told “Ingen Sjance, Froken Brit!” by Norway), or whatever the Speaker decides is non-Unicornesque enough to get serious support. How the votes will take place, how they’ll be weighed, will they be subject to whipping (always popular amongst the Tories and their public schoolboy contingent) is all still up in the air, but the fact of the matter is that after three years of embarrassment and abuse Parliament has had just about enough of this Government’s blatant contempt for the democratic process and has, with a quivering jaw and mascara-streaked face, torn the Enoch Powell biography from Theresa May’s cold, dead hands and screamed “You will listen to me!” into the sudden, bewildered silence.

And what has Queen Theresa made of all this? Well she’s telling everyone who’ll listen that she’s not bothered. Just like she’s not bothered about the two hammering defeats her deal has already suffered, or the humiliating failure of her last display of British steel and diplomatic finesse in Europe, or even the Speaker’s refusal to let her deal get another vote without something more momentous than the font changing. None of it matters to Queen Theresa because she’s in a better place now, somewhere disagreeable impediments like votes and negotiations and basic reality can be safely disregarded because She’s the Queen of the Land of Do As You Please and everything else is noise. She can state, via her shrinking supply of pot-grown junior ministers, that no responsible Government can be expected to enact important legislation affecting the future of the country without knowing the desired end-point and process in advance with a blithe lack of even the most basic self-awareness. Not bothered. She can lecture Parliament on thinking it can force through revolutionary changes to centuries of constitutional tradition without reflecting for a moment on the fact that her Government is only still technically ‘in power’ because her predecessor’s Parliament made revolutionary changes to centuries of constitutional tradition with its Fixed Term Election Bill. Not bothered. She can even stand there and declare with a more-or-less straight face that No-Deal is both on and off the table at the same time, like a Schrodinger’s Cat of a policy, except this cat is ten feet long, long in tooth and claw and weighs the same as a small family house. She. Is. Not. Bothered.

Probably, it appears, because the Grand Wizards (no, really, that’s their term, because why not, eh?) of the Brexiteerean Jihad look like crumbling under the pressure of Reality and voting for May’s Deal de la Merde as the worst possible option they can hope to foist upon the country before the cock crows and everyone starts sobering up in the cold light of Brexit day. It’s like she’s spent so long huffing their ultra-high leaded emissions in pursuit of their votes that she hasn’t even noticed the way the Parliamentary math has shifted around her. Or, to put it in an even creepier way. She’s spent the whole of the School Leaver’s Party following Jacob (Call me Kyle) Reese-Mogg and his gang of Emo-Goth Randians and Ulster Exchange Student Militia around, laughing at their crap racist jokes and doing anything and everything she can, however degrading, to get them to come back to her house for an invite only After-Party, but, just as she’s finally got their muttered ‘okay, maybe, whatever’ in the bag, she turns to see that everyone else has got bored waiting and left to go and see what the beer is like at the Free Oompah Band and European Folk Music Festival in the local park. And now, in a final swipe of the dirty dishcloth of (what Western popular culture erroneously believes to be called) karma across the face of her dreams, Theresa learns that the only way anyone will even consider going to her party is if she’s not there.

How unfair, said nobody else.

Basically, it boils down to this. Parliament can indicative vote until it’s blue in the face, but it can’t force the Government to do anything the Government doesn’t want to do. OTOH, the E.U. has given May only one week to get her Withdrawal Deal passed, and if it doesn’t, well, there’s a hard deadline of April 12th for Britain to come up with an alternative that Parliament – can – support and – crucially – the E.U. will accept. The balance of power has slowly, steadily shifted under the crushing weight of glacial reality so it’s no longer May’s Government stuffing her deal in the face of Parliament and saying “Vote for this or the country gets it”, but rather Parliament itself deciding on a version of Brexit enough of them can coalesce around (crucially, probably, I think, with a Confirmatory Public Vote rider tagged on to bring the anti-Brexit rationalists on board) and then shoving – that – into May’s face and saying “Let this get a free vote or the Tory Party gets it”. Remember, the entire concept of British Parliamentary democracy revolves around the idea that the faction that can harness and provide a majority for legislation gets to be the Government. No majority, no Government. Claiming to be the Government while refusing to enact the will of an – actual – majority, ooooh, now, that’s the kind of genuine constitutional crisis we never got before the stupid Fixed Term Election Bill and one that has only one answer, a resounding vote of No Confidence and a General Election.

Now, back to your scheduled countdown to the release of the – actual – Mueller Report rather than the hastily scribbled customer review put out by the guy being paid to protect Trump.

I will tell you, Brexit confuses me much like the election of IQ45 must confuse our allies…but I sure enjoy Tony Jay’s hot takes on it. I look forward to many more.