Paul Manafort has just been indicted by a grand jury in the City of New York! 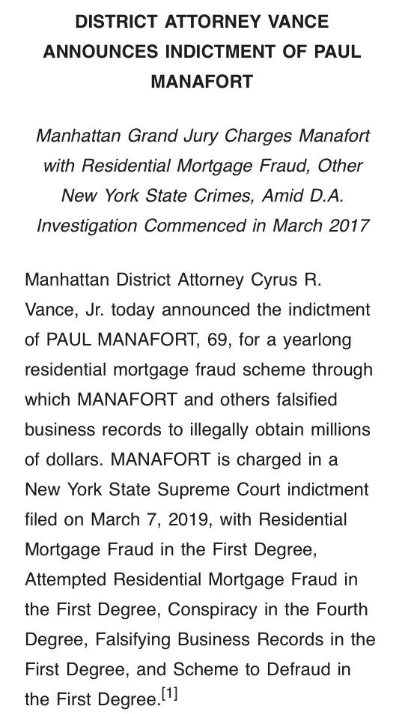 Here’s the indictment from the City of New York. None of these charges are subject to a presidential pardon! And the prison Manafort would serve his time in if convicted of these charges in the City of New York is not Club Fed! I would also expect that similar cases will be brought against Manafort in DC. And this could also be the case for others like LTG (ret) Flynn, Roger Stone, etc.

One final item, despite what Manafort’s attorney just said that there was no collusion, Judge Jackson made clear today in court, as a finding of fact, during the sentencing that Manafort did indeed conspire with Russian intelligence during the 2016 campaign on behalf of the President. And that Manafort lied about it.

Judge said she has reviewed documents about a key Aug. 2, 2016, meeting between Manafort, his right-hand-man Rick Gates, and a business associate the FBI linked to Russian intelligence. The judge said the special counsel proved that M gave "intentionally false testimony"abt it.

Previous Post: « Manafort in for 7.5 years
Next Post: A Note About Manafort and Another Thing Republicans are Fucking Up »