You are here: Home / Politics / America / The Line of Succession for the Governorship of Virginia: Lieutenant Governor Fairfax Comes Under Fire Even as Governor Northam huddles with his cabinet as an attempt to maintain his governorship of Virginian, the same fine folks that thought Breitbart was too liberal have decided to direct fire against Lieutenant Governor Justin Fairfax.

The allegation involves an unsubstantiated claim of sexual assault against Fairfax during the Democratic National Convention in 2004.

RICHMOND, Va. — As Virginia Governor Ralph Northam faces increasing pressure to resign over a racist photograph from his 1984 medical school yearbook, the man who would take his place — Lt. Governor Justin Fairfax — is responding to accusations of his own.

The allegation involves an unsubstantiated claim of sexual assault against Fairfax during the Democratic National Convention in 2004. The claim was posted Sunday night on the same website that first published the racist photo from Gov. Northam’s yearbook.

The Washington Post, as well as our sister station WUSA9 in Washington D.C., have known about the claim for months, but have not been able to corroborate the allegations.

“Lt. Governor Fairfax has an outstanding and well-earned reputation for treating people with dignity and respect,” read the statement released on Twitter.

“He has never assaulted anyone – ever – in any way, shape or form.”

“This is part of the sad and dark politics that the Lt. Governor has dedicated himself to helping Virginia and the nation rise above,” the overnight statement read.

“The Lt. Governor will take appropriate legal action against those attempting to spread this defamatory and false allegation.”

WUSA9 is refraining from publishing further details of the claim, as key elements have not been able to be verified. Broad outlines of the claim are only being published after Fairfax’s office released an official statement now in public view.

The full details of the allegation are on Big League Politics.

This allegation was previously investigated by both local Virginia news outlets and The Washington Post last year and they could not substantiate it. That doesn’t mean it isn’t true, or parts of it aren’t, but that the allegations couldn’t be corroborated and/or substantiated. 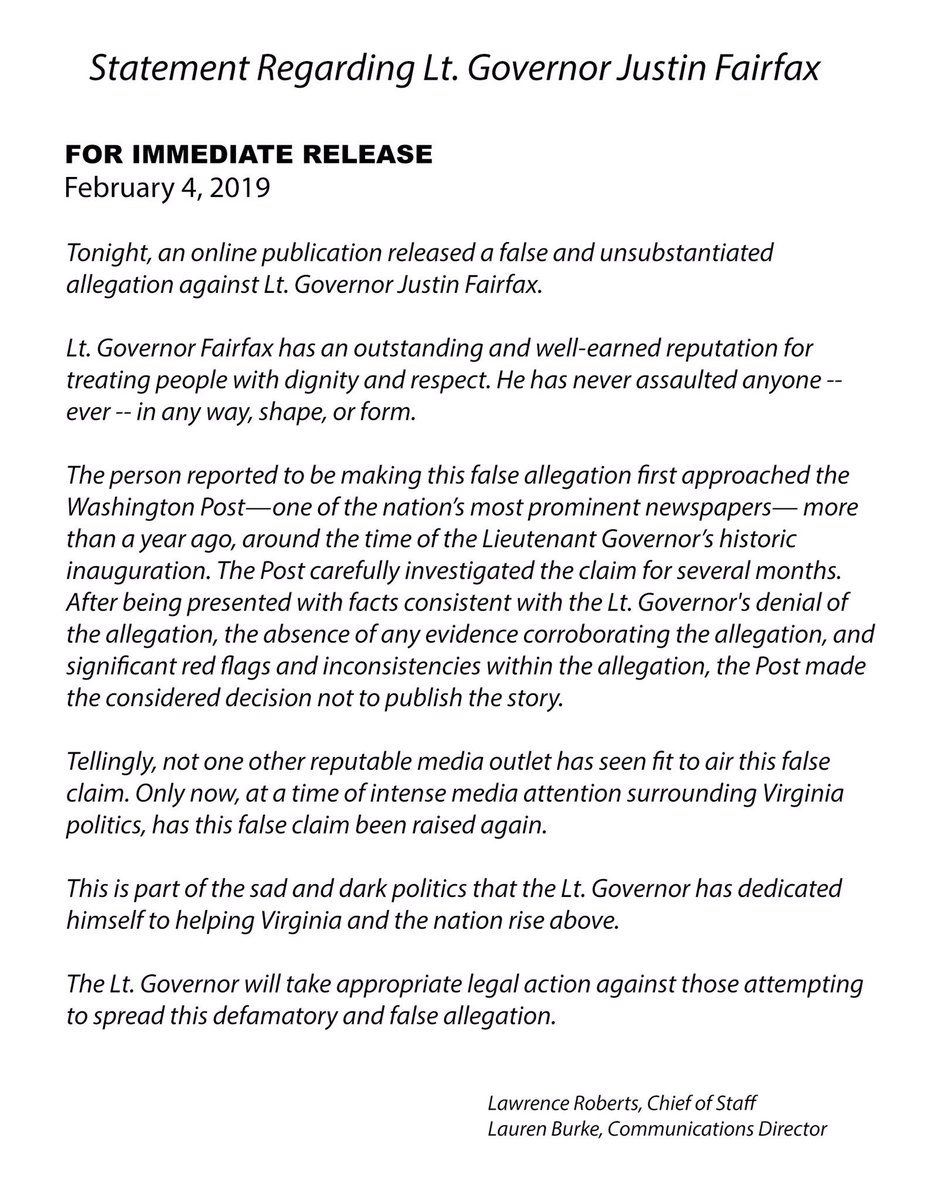 I'm beginning to suspect the "concerned citizen" in the Northam case is the Ginger Menace, Charles Johnson.

Doesn't change what Northam did, just starting to have a spider-sense about it.

The problem here is that it doesn’t really make a lot of political sense to do all of this so far from the Virginia state elections that are coming up later this year. If either and/or both of these stories play out, with Northam ultimately resigning or being forced out by the Democrats in Virginia – and there is a process to do that – and Fairfax also having to step aside, it isn’t going to make the Democrats look like they didn’t take either and/or both of these problems seriously. Nor would it hand the governorship to a Republican as the next in the line of succession is Mark Herring, who is Virginia’s Attorney General and a Democrat. (emphasis mine below)

In the case of the removal of the Governor from office or in the case of his disqualification, death, or resignation, the Lieutenant Governor shall become Governor.

If this is an attempt to place the Virginia governorship in Republican hands, sort of a coup by scandal, it won’t work unless there’s a scandalous story involving Virginia Attorney General Herring teed up and ready to be deployed because the only Republican in the line of succession is the Speaker of the Virginia House of Delegates is Republican William J. Howell.

What is unclear right now is what, in the larger political sense, specifically of partisan political warfare, is actually going on. If this is a coordinated attempt to remove the Democratic leadership of Virginia’s executive branch through selected news reports of opposition research that was either overlooked or never previously released because it couldn’t be verified, then expect Big League Politics or some other similar outlet to drop a story on Virginia Attorney General Herring in the next few days, especially if other news outlets give the allegations against Lieutenant Governor Fairfax serious coverage and the pressure builds on him to resign as well.

This much coincidence, long buried inappropriate behavior by Virginia’s Democratic governor and lieutenant governor that one would have expected to have been put forward as oppo research much earlier in their political careers, takes a lot of work. That it doesn’t seem to really be a coincidence doesn’t excuse Governor Northam’s admission he dressed in blackface to go to a theme party as Michael Jackson, even as he disputes that he is either the person in blackface or the person in the Klan costume pictured on his yearbook page. Nor would it excuse Lieutenant Governor Fairfax if the allegations that have surfaced regarding sexual assault are substantiated. That it would all surface right now seems much too convenient.

Once is chance, twice is coincidence, the third time is enemy action.

Lieutenant Governor Fairfax is giving a press conference right now where he is both addressing the issues around Governor Northam and the resurfaced allegations against himself. I can’t find a live stream. If I do, I’ll update the post.