END_OF_DOCUMENT_TOKEN_TO_BE_REPLACED

Here’s what ?@HillaryClinton? is up to this week… https://t.co/lTSWqrcDKT

Priebus made him work. He was fired.

Kelly made him work. He was fired.

Kushner doesn’t want to be fired, so he doesn’t make him work. https://t.co/36lRrQQFW5

How many days until Springtime For Hitler training?

END_OF_DOCUMENT_TOKEN_TO_BE_REPLACED

The confusing parts of Lord of the Rings start to make a lot more sense when you realize it's actually just a transcribed #DnD campaign. THREAD:

All due respect to the learned Professor Tolkien, for the great joy he has given us and the myriad tales he inspired, but rereading Lord of the Rings after forty years *does* make it obvious how lightly his original worldbuilding was edited.

Showed this thread to the Spousal Unit, who was a locally renowned DM back in the hex-paper days, and he LOL’d too, so…

1) Starts with a long, low-level adventure of just getting out of The Shire and getting the ring to Rivendell. DM originally prepped a low-level hobbit campaign for their roommates who had never played before.

3) Steve is clearly a touring musician IRL, because Gandalf is constantly dipping out of sessions for extremely weak in-game reasons. Steve also keeps writing original songs for the campaign world, which is why there's a goddamn new elf-song on every other page.

4) Word gets out that a fun campaign is going on. DM agrees to let Rachel play a badass ranger, she's so amped that she immediately writes 40 pages of backstory. DM reads it and thinks "This is honestly more compelling than what I had planned. Is this the campaign now?"

7) Everyone very psyched. Boromir's player Kevin tries to stir up trouble "because that's what his character would do." Fuckin' Kevin.

9) Dungeon is awesome. Great encounters. Pippin rolls a Nat 1 on Stealth. Drums in the Deep. And right before the final Boss Battle… Steve books a gig in another city that's gonna take him out of town indefinitely. Everyone SUPER BUMMED!

END_OF_DOCUMENT_TOKEN_TO_BE_REPLACED

In 1942, Fred refused to go to the government's prison camps for Japanese Americans. After he was arrested and convicted of defying the government order, he appealed his case all the way to the Supreme Court. #KorematsuDay pic.twitter.com/0YSnESSeoI

100 years ago today, Fred Korematsu was born in Oakland, California. After being turned down for military service in 1940 for health related reasons he lost several jobs due to his Japanese heritage after Pearl Harbor was attacked. He underwent plastic surgery in order to pass as Latinx so he could work. Finally, Korematsu went into hiding to evade the internment camps. He was arrested in San Leandro and jailed in San Francisco. It was there that he was approached by the ACLU and the rest, as they say, is history.

Today is Fred Korematsu Day in a number of states:

Several states celebrate Fred Korematsu Day on January 30, Korematsu’s birthday. Established in 2011, the “Fred Korematsu Day of Civil Liberties & the Constitution” honors the legacy of Korematsu, who resisted Japanese American incarceration during World War II. He was one of three who legally challenged imprisonment, all the way to the Supreme Court.

The issuance of Executive Order 9066 in February 1942 allowed for the removal of any persons from Western coastal areas. Although EO9066 did not specifically target Japanese Americans, it paved the way for the forcible removal of those of Japanese descent from their homes and into camps. In March, “Civilian Exclusion Orders” were posted for all those of Japanese ancestry in Washington, Oregon, California, and southern Arizona. The majority of those of Japanese descent in the US lived in these areas and two-thirds were native-born citizens of the United States. When faced with having to report to an assembly center, Oakland, California-born Fred Korematsu chose a different path. Korematsu, a 23-year old welder, stayed in Oakland with his Italian American girlfriend. He even had minor plastic surgery on his eyes and changed his name in an attempt to avoid recognition.

For those interested, there are more resources at The Fred Korematsu Institute.

It is especially important to remember Korematsu, as well as what he and other Japanese-Americans went through given the current travel ban, attempts to change immigration law and end asylum by executive order, and build a wall solely because the president’s advisors needed a way to make sure he’d talk about immigration while campaigning and because the idea of immigrants, legal or undocumented, makes Stephen Miller feel icky.

Long ago, Fred Korematsu was arrested in San Leandro, Calif., his home town, for defying an executive order that led to the expulsion or imprisonment of more than 100,000 Japanese Americans after Japan bombed Pearl Harbor.

He later went to the Supreme Court to fight it, much as others now oppose President Trump’s executive order barring people from seven mostly majority-Muslim countries from entering the United States. Korematsu lost in 1944 and, although his criminal conviction was vacated in 1983, the case was not overturned.

More than 30 years after Korematsu challenged, for the second time, what is widely considered one of the most unjust government actions in U.S. history, the country watched another legal battle conclude this morning, when the Supreme Court issued its decision in Trump v. Hawaii. The court upheld Trump’s travel ban and overturned Korematsu’s case.

The irony is that Korematsu’s vindication came as the Supreme Court actualized his worst fear by “racially profiling of a group because they looked like the enemy,” according to Fred Korematsu’s daughter, Karen.

“The Korematsu court presumed people were dangerous because they were of Japanese descent. Today, it is because they are from a particular country,” said Erwin Chemerinsky, who is dean of the University of California at Berkeley Law School and once called the Supreme Court’s ruling against Korematsu “one of the worst decisions in history.” Neither assumption, he said, is rooted in equal protection of the law.

“In the majority opinion, Chief Justice John G. Roberts Jr. wrote, ‘Korematsu was gravely wrong the day it was decided.’ I think a future court will one day say [today’s decision] was a huge mistake,” Chemerinsky said.

“Korematsu may be overruled, but it’s not to be celebrated,” said Karen Korematsu. “Unfortunately with this decision, we are continuing to repeat history.”

For months, Karen Korematsu heard echoes of her father’s old warnings in the way Trump’s order cast suspicion on an entire class of people, and the way its defenders in court made claim to national security without citing any evidence against the people the order affected.

She was reminded that during the campaign, Trump promised a broader ban on Muslim foreigners — as well as a registry of Muslims living in the United States.

She was reminded that one of his top backers cited her father’s case as legal precedent for such things.

Korematsu was sent to the Central Utah War Relocation Camp in Topaz, Utah.

END_OF_DOCUMENT_TOKEN_TO_BE_REPLACED

Also, I had a sleeve of Ritz crackers that I put on the table next to my chair in the living room, went to do some stuff, came back, and the crackers were gone. I knew immediately who was responsible, and sure enough, Thurston was on the beck deck in -3 weather eating MY GOD DAMNED CRACKERS.

END_OF_DOCUMENT_TOKEN_TO_BE_REPLACED 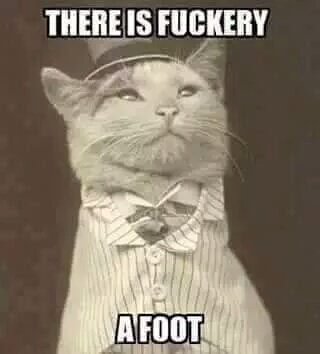 END_OF_DOCUMENT_TOKEN_TO_BE_REPLACED

On Senate floor Mitch McConnell rips a federal holiday for Election Day as part of a “power grab” by Democrats to win elections.

When you insist that a bill designed to support voting rights for everyone, shine a light on billionaire donors, crack down on lobbyists' influence and protect our elections from foreign interference would just help Democrats, that's a pretty big tell. https://t.co/daXp87DMBo

And it’s getting more widely noticed…

I'm starting to better understand Mitch McConnell. He's not leading a co-equal branch of govt. He's leading a corrupt cabal of complicit conservative co-conspirators in congress who conducted a coup to control the courts & now don't give a damn what Putin's Puppet POTUS does. pic.twitter.com/lqLwAXgVN7

… There simply is no more loathsome creature walking the political landscape than the Majority Leader of the United States Senate. You have to go back to McCarthy or McCarran to find a Senate leader who did so much damage to democratic norms and principles than this yokel from Kentucky. Trump is bad enough, but he’s just a jumped-up real-estate crook who’s in over his head. McConnell is a career politician who knows full well what he’s doing to democratic government and is doing it anyway because it gives him power, and it gives the rest of us a wingnut federal judiciary for the next 30 years. There is nothing that this president* can do that threatens McConnell’s power as much as it threatens the survival of the republic, and that’s where we are.