You are here: Home / Politics / America / Speaker Pelosi Clarifies that the President Will Not Deliver the State of the Union Unless the Government Reopens

BREAKING: Speaker Pelosi responds to President Trump; says the House will not consider a concurrent resolution that would authorize the president to deliver a State of the Union address in the House chamber until the government is reopened. pic.twitter.com/VHqIkQLW7D 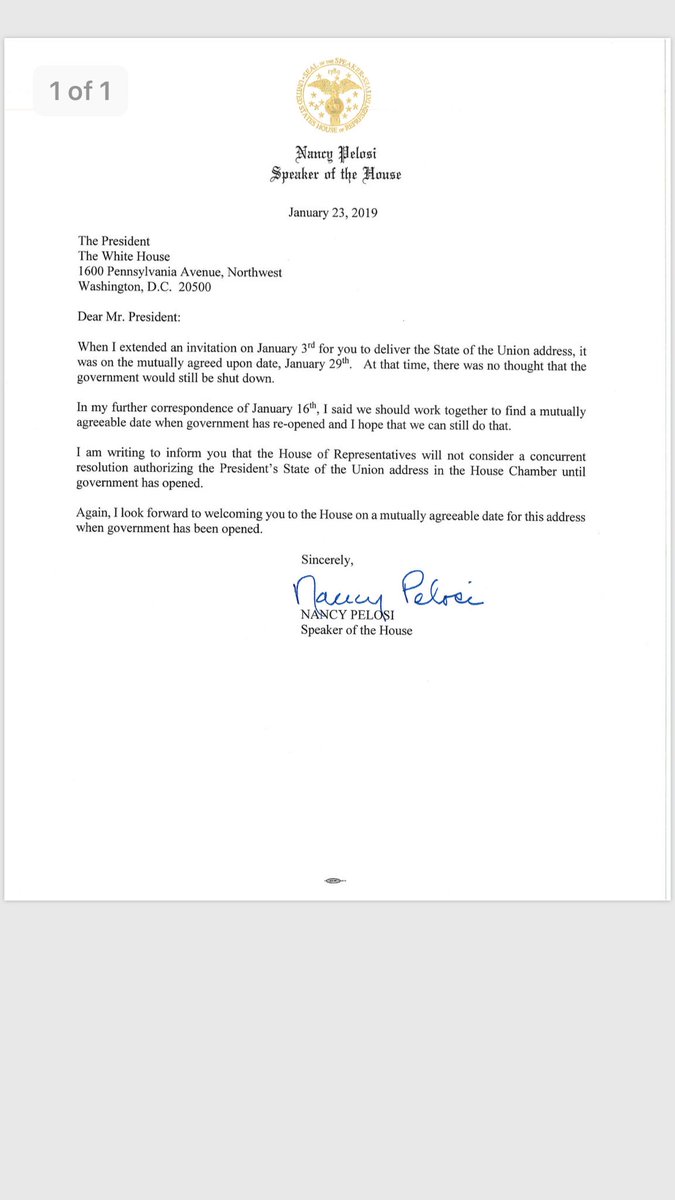 To follow on BettyC’s post from earlier today, the only way the President, or anyone else for that matter, makes a joint address to Congress is if both chambers pass a joint concurrent resolution inviting that person to do so. Speaker Pelosi has now made it abundantly clear that until the partial shutdown is ended and the parts of the government that are now closed are reopened, there will not be a joint concurrent resolution brought up, let alone passed, in the House of Representatives inviting the President to deliver the State of the Union address. The President needs to come to terms with a simple reality: he is not in control over this matter. Speaker Pelosi is both smarter than he is and a strategic thinker, which he isn’t. He has no power over her. And he has no power over the House of Representatives, provided it is is not being led by a figurative invertebrate, like Paul Ryan, who is afraid of mean presidential tweets, Gym Jordan, Mark Meadows, and the base of the Republican Party. While Senator McConnell may be willing to finish his project of transforming the Senate into a parliament subservient to the President as head of government provided the president is a Republican, Speaker Pelosi is not willing to do that with the House of Representatives. She is also not going to play the President’s games. She said no, she means no, and she has the ability, unlike the President’s other female targets and victims over the years, to actually enforce that no.

Expect more and more presidential petulance punctuated by a temper tantrum or several as the shutdown drags on and that mean lady Speaker Pelosi continues to tell the President that he can’t have his ice cream (the State of the Union address) until he eats his vegetables (does his actual job and agrees to reopen the closed parts of the government) before this faux crisis created by Paul Ryan’s weakness and the President’s petulance actually leads to a real one.