You are here: Home / Past Elections / Election 2018 / Stacey Abrams vs. the Revanchist Racist

Retweet this to remind everyone in Georgia that their vote counts. pic.twitter.com/bD53MuFifN

Wim Laven arrived to his Georgia polling site unsure of voter suppression allegations. Then he waited 2 hours in the sun; saw one person in line treated for heat exhaustion; watched a 2nd collapse, yet refuse to be taken to the hospital so he could vote.https://t.co/T1OrO4NxZ4

… “I have a hard time imagining this is anything but an intentional effort,” said Mr. Laven, who teaches political science at Kennesaw State University. “I can’t imagine this is just pure incompetence. Everyone knew how serious people have been around here about getting out the vote.”…

Georgia ranks 43rd out of 50 in election integrity, according to one of Mr. Shufeldt’s measures, which grades things like state election administration and expert opinion surveys.

That ranking is emblematic of almost a decade of fights between election rights groups and Mr. Kemp. Questions have long swirled around Mr. Kemp’s office about issues including voter data security and whether Georgia’s voting machines were fit for modern elections…

From The Root, “Neither Voter Suppression Nor Being Called ‘Coon’ and the N-Word Will Stop Black Georgia From Voting”:

Waynesboro, Georgia—Sarah Jenkins has long had to deal with simmering community tensions. She owns a small business in a white part of town that caters to senior citizens and people with mental disabilities, an arrangement many of her neighbors frown upon.

But since “Ms. Jenkins,” as folks like to call her, became a big supporter of Stacey Abrams—who is trying to become the first black woman to become governor anywhere in the nation—those tensions have boiled over. They’ve grown especially ugly since Abrams won the Democratic nomination in her quest to lead Georgia.

The Abrams campaign signs Jenkins placed on her lawn were frequently stolen; she would replace them. But then came the one-word, handwritten messages on white pieces of paper that started showing up in her mailbox.

Still, Jenkins was among the throng of Abrams supporters, maybe a hundred or so, who gathered to listen to the gubernatorial candidate deliver her stump speech in a church parking lot in Waynesboro, Ga., on Wednesday afternoon.

It will be choices such as the one Jenkins is making—remaining steadfast in the face of intimidation in a state where charges of voter suppression have increased the past few weeks—that will likely decide what polling data says is a close race between Abrams and her Republican challenger, Brian Kemp.

Georgia made national headlines recently after the Associated Press found that 70 percent of the voter registration applications being held up by Kemp, who is also Georgia’s secretary of state, are African American. (Georgia is 32 percent black.)

Like the tension in Jenkins’s neighborhood, Kemp’s dual role as Abrams’ opponent, as well as the man in charge of voter registration, has become a prominent feature of this election cycle. Kemp has justified his decision to hold up so many applications because of the “exact match” policy that can invalidate an application if something as simple as a hyphen on a last name of a license is missing on the form. Most civil rights groups consider it a voter suppression tactic. While those whose applications are among the 53,000 can still show up to vote with the proper identification, many black Georgians see this as a 1960s-era attempt to scare them away from the polls.

“I come from the generation where we had to march to be able to vote,” Evelyn Ellis, 72, of Augusta, said after Abrams spoke. “I’m the last of that generation who can tell that story. It was a terrible thing my generation had to go through. For there to be any kind of suppression is just awful. So I am hoping and praying that even though that effort is out there that we will still be able to overcome it.”… 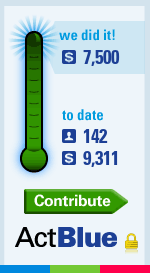 Must-read @pemalevy profile of Brian Kemp, who's dedicated his career to preventing people of color from voting & whose voter suppression policies could tip GA governor's race in his favor https://t.co/Bacw92fMSO

If any member of the GOP had even the tattered vestiges of decency left, they’d be publicly shunning Kemp just for his clumsiness. But in Trump’s America, being a Repub means never having to apologize for being shamelessly racist.