You are here: Home / Economics / C.R.E.A.M. / And everywhere I look there’s a dead end waiting

I don’t suppose any of you are surprised that brave Jeff Flake’s FBI gambit will end in a sham investigation designed to clear Saint Brett:

Perhaps more important, the White House Counsel’s Office – i.e., close Kavanaugh associate Don McGahn – has given the FBI a list of permitted interviews. This list appears to prevent any follow up on a number of leads raised in Thursday’s hearing, such as conflicting accounts of Kavanaugh’s college drinking and the reference to Mark Judge’s high school employment which was referenced as a possible corroboration of Blasey Ford’s testimony.

We’re nearing our goal in the Balloon Juice Forty House Seats To Freedom Fund. The money is split 40 ways by default, but you can give to just a few candidates to minimize mailing lists. If we don’t take at least one chamber this November, I do fear for our democracy, such as it is. 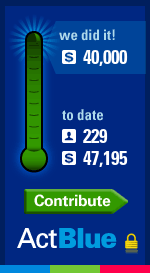 hen I hit the goal, I’ll take recommendations for more races and do those. By the way, last Friday ActBlue took in 11 million dollars, the most ever in a single day.