It’s completely obvious that Trump thinks Putin has something on him. Josh Marshall nails it:

When the full story comes out, to the extent it ever does, how are people going to explain how all these bizarre and really inexplicable things were happening and they just said, “Well, he’s got an odd style.” Or “He just doesn’t like people questioning his epic election win.”

That doesn’t remotely make sense now and it will seem willfully oblivious later. Obviously for most of us who are mere observers it doesn’t matter that much. But many others aren’t just observers. They had power to act.

It’s a lot like Iraq. It was obvious that there were issues with the so-called intelligence about WMD and equally obvious that Bush Co. didn’t have much of a plan for the post-invasion. But the serious conventional wisdom was that there we WMD and we’d be greeted as liberators. Some people have changed their roles — many neocons have been onto Trump and Russia from the word go, and Glenn Greenwald is one of Trump’s staunchest defenders. Overall though the same Very Serious People who said Iraq would be glorious are now telling us that Trump is probably not compromised.

No one will save us from what’s happening except ourselves. The only thing that matters is winning in November. So we’re doing another fundraiser.

Until 2013, Utah had three congressional districts, and the relatively liberal Salt Lake City was represented by the Blue Dog Democrat Jim Matheson. When a fourth CD was added, SLC was divided up like a pizza, Matheson declined to run for the newly gerrymandered 4th CD, and that seat was narrowly won in 2014 by Republican Congresswoman Mia Love, who was then re-elected in 2016.

This year she has a much stronger challenger in Salt Lake County Mayor Ben McAdams. Some controversies over siting homeless shelters and new development have strained his popularity, but he remains a well-liked figure. As mayor of the county (not the much more liberal SLC proper), he has mastered the “moderate centrist” balance necessary to win over moderate white Mormons in the suburbs. Moreover, the district is heavily Hispanic and Pacific Islander, two groups with whom Trumpism is not popular—and Mia Love has proved to be a useless rubber stamp on Trump’s power grabs, and voicing only the weakest of protests against the administration’s abuse of immigrants.

The optics of the race are awkward. Love has a compelling story: the daughter of Haitian immigrants, the only black congresswoman in the GOP delegation, and the only member of Utah’s congressional delegation who is not a white man. Nevertheless, she votes with Trump 96.5% of the time, and she has to go. Ben McAdams is a smart, charismatic public servant with integrity, and I would be proud to see him represent Utah in congress (though not in my district, as I have the misfortune to be represented by the odious but safely gerrymandered Chris Stewart).

You know what to do. 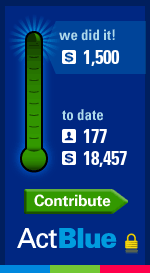 I have a very good baby picture too. Previous Post: « Excellent Read — “Nancy Pelosi: ‘They Come After Me Because I’m Effective’ “
Next Post: We Still Don’t Know »