You are here: Home / Anderson On Health Insurance / Spread-em

Right now, as I am looking at the initial rate filings (compiled by KFF and Charles Gaba), I feel like I am back into my CSR thought process of last summer. I am seeing a very different universe than the political class. Last summer, I was arguing that if CSR was terminated, the incentives would not line up for a reinstatement. I also noted that the bump in advanced premium tax credits that were not supported by the underlying claims cost would make 1332 waivers easier to file.

This year, I am convinced that ACA rate announcements won’t have a meaningful influence on the midterms for either party.

Right now, Charles Gaba is tracking a national rate increase and it is a single digit increase:

With California added to the mix, I now estimate that carriers are requesting ~8.0% average rate increases in 2019; HOWEVER, that includes an extra ~9.5 percentage points due to #ACASabotage (#MandateRepeal, #ShortAssPlans & #RiskAdjustmentFreeze in TN specifically).

And this 8% estimate is probably going to be higher than the actual final rates.

Several states have 1332 waivers for reinsurance that are working their way through the approval process. CMS has been approving straight forward waivers in a timely manner. Reinsurance will knock several states’ initial rate requests down by several points or more. We should also expect to see lower final rates than initial rates in Virginia because they are expanding Medicaid. Medicaid expansion moves a sicker than average population out of the QHP risk pool and into the Medicaid pool. It also takes out a good chunk of the Silver Load gap as the 100-138% FPL population had qualified for 94% AV Silvers which were the biggest chunk of the CSR incremental bump. The same logic may apply in Maine once their Medicaid expansion is finalized.

Finally, for the subsidized population, it looks like significant chunks of the buying population will be seeing better deals if they are willing to switch plans. This will be what the healthy and price sensitive will do.  Larger spreads means cheaper prices for subsidized buyers if they do not buy the benchmark silver plan. 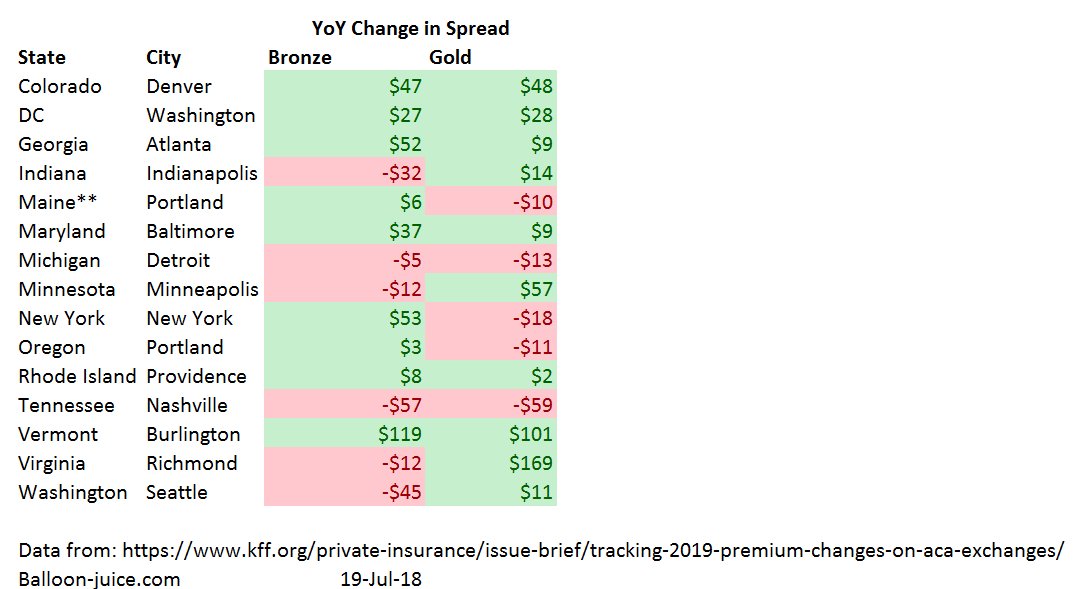 At this point, I am beating a mostly dead horse, but this seems to be very clear to me that rates will be a MEH event this fall.

The argument this fall will be over values and priorities, not pain shocks.