Excellent article over at the Washington Monthly…ignore me and go read it.

But these young people from Marjory Stoneman Douglas High School have jolted us out of that script and this is the anthem that keeps playing in my head as I read about the impact they’re having.

So far these young people have done countless interviews, travelled to Tallahassee today to push for more gun laws, will participate in a CNN town hall tomorrow, and are busy planning a nationwide “March For Our Lives” on March 24th.

They are also inspiring others.

If you need a boost, read the whole thing.

Whenever anyone gets down about the political climate around my house, I always come back with a reminder that we’ve been witnessing watershed moments for almost a decade now. And now they are happening at a dizzying rate.

Barack Obama for president? Are you kidding me? I thought, no way, this will never happen. Bad Horse kept insisting this WAS happening. Then I heard Obama speak and I was on board. And you know what I did? I changed my registration from independent to Democrat, I volunteered, I knock on doors (I sucked at that btw). I got off my ass for a candidate. I’d never done anything but give $$ before.  As it turns out…so did a whole lot of other people.  And then…then…the most wonderful thing happened, we got tickets for the convention and I stood in a stadium filled with people that I would never expect. And as corny as it sounds, everyone of them was filled with hope and that hope carried Barack Obama to the presidency. Watershed.

Gay Marriage.  When the wave began, I thought, this is not the time, the climate is not going to sustain this. Don’t get me wrong, I was all for it, but now? It didn’t seem possible – maybe because Prop 2 felt so fresh,  a horrible, dark stain on Colorado history (IMO).  Well, I wrong. Wrong, wrong, wrong. It was the moment.  State by state, ballot by ballot, court decision by court decision.  Boom! Watershed.

Black Lives Matter:  If it makes you uncomfortable, then it’s working. If Fox and the right wing are turning it into a threat and filled with villains, then you know it’s making a difference. As powerful as BLM has been, I believe we have only seen the beginnings of this wave of change.

There’s been more, but let’s jump ahead to the present, where suddenly we are getting these moments in fast and furious succession.

The Women’s March 2017: So when the rumblings started, this time I was ready. I could feel the righteous anger, the power, the can-do spirit. This time I was not surprised when DC filled with women, children and men in cute pink pussy hats, marching in support of one another and against the groper-in-chief.  What did surprise me? EVERY. WHERE. ELSE. Blue states, purple states, red states all had large marches. A wave was growing and it wasn’t going to stop.

Anti-White Supremacist/Anti-Nazi Counter Marches:  I can’t even believe these have to be – but the moment here is the consequences for these racists who feel safe removing their hoods and coming out in the open. They are learning their beliefs are not normal or acceptable – especially to their employers. bye-bye.

#MeToo & Time’s Up: This is so fresh, we are only seeing the tip of what this will accomplish. But the number of powerful men who have had to step down, been fired and publicly shamed…I’m not sure anyone could have seen that coming.  Still in in its infancy, there have been some questionable actions, but I believe as it matures, it will become a place for women to find support as they move into more positions of power, run for office and juggle careers and family.

And that brings us to today. And our young people who HAVE. HAD. ENOUGH.

I don’t even know where to begin – I was here for Columbine. I walked around in a fog for several weeks, not knowing what to do to make this stop. I was shouted down by friends and family when I suggested any type of gun regulation. Then it kept happening. Again. And again.

By the time the Sandy Hook massacre took the lives of 20 children and 6 adults and NOTHING happened, that was it, I had lost hope. This was just how we were going to live from now on…sending our children out to be slaughtered in the name of the second amendment.

Well, again (as you can see from many examples from above) I was wrong. And I support these young people, many who will soon have the power of the vote, to facilitate change in anyway they feel is effective. They are going to be vilified and we need to continue to stand with them. March 24, mark it on your calendar. I believe it will be another watershed moment.

We cannot understand the moral Universe. The arc is a long one, and our eyes reach but a little way; we cannot calculate the curve and complete the figure by the experience of sight; but we can divine it by conscience, and we surely know that it bends toward justice. Justice will not fail, though wickedness appears strong, and has on its side the armies and thrones of power, the riches and the glory of the world, and though poor men crouch down in despair. Justice will not fail and perish out from the world of men, nor will what is really wrong and contrary to God’s real law of justice continually endure. – Unitarian Minister Theodore Parker 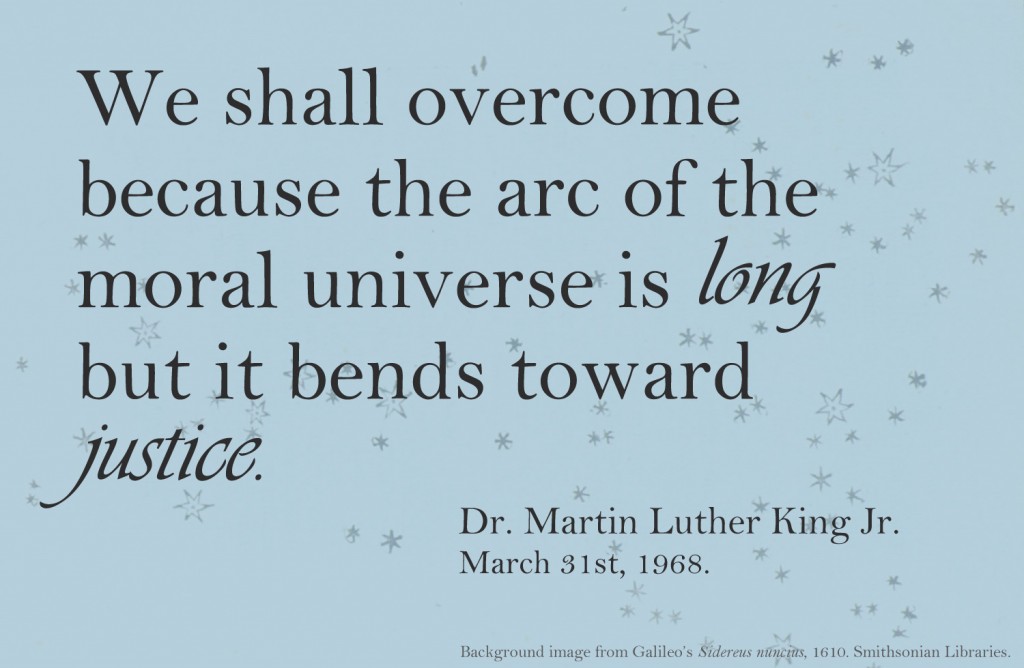 I know I’ve missed moments above – feel free to castigate me in the comments.