Some of you likely remember that series of scientific studies showing the most dramatic anti-aging therapy ever discovered. All you need is lots of blood from the very (very) young and, in rats and mice anyway, the worst effects of age disappear. Ergh. The good news was that researchers might have identified a protein called GDF11 that had all the same good effects as the blood of children without the obvious ethical issues.

That sounded promising, but follow-up reports suggested that GDF11 might not work as well as they first thought. Now, much more authoritative follow up studies have confirmed the point.

[W]e have now gone from the hope that GDF11 might be the factor that is lost as a result of aging, and therefore could reverse age-related phenotypes, to the finding from multiple groups that GDF11 is not decreased as a result of aging, makes age-related phenotypes worse, and is now shown to be a risk factor for human frailty and disease when it is found at high levels (Schafer et al., 2016).

On the plus side, data for very young blood still looks solid. If you consider the potential market for an actual, no bullshit treatment to reverse aging, I feel pretty confident that this will become a question people have to address sooner or later.

Here’s a picture of an Orange Bishop that I took at the National Aviary. 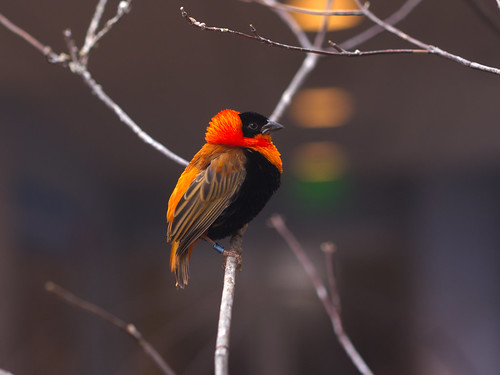