You are here: Home / Pet Blogging / Dog Blogging / Open thread, and where I’m leaning when the primary gets to PA

I had a bunch of stuff to say about the nomination race, but then Tom just said it better than I would have. So here are some other thoughts I have not put much work into, god help you all.

If I had my choice I’d give Obama another couple terms. He would never forgive me for that, but I simply love everything about the guy. I admire his even keeled temperament. I love that he could not give less of a crap what some expensive haircut just said on cable news. I respect the hell out of his intellect. I respect the fact that he gave Republicans the benefit of the doubt long after every reached out hand came back with bite marks on it. It was the decent thing to do, but I also think it is good strategy and I believe his brand of politics will age very well. Obama has always been the grown up in the room. Of course he screwed some pooches, as one does in this job, but how many Presidents are man enough to admit it? Let the gears creak for a while. Eisenhower? That one night he dissected Donald Trump and knocked them dead at the Correspondents Dinner, that same night he just called the strike on Bin Laden but he didn’t know whether it would end in glory or disaster. Do not play poker with him.

The Affordable Care Act. Try to tell me with a straight face that anyone would have gotten that bill passed. Perfect? No. But twenty million Americans want a word with whoever thinks it would be a good idea to turn back the clock.

At this point, deep in Obama’s No More Fucks to Give phase, I mostly want to know who paid more attention for the last eight years. Because this is not a joke. The Republican party is a pack of loons in a suicide vest who forgot why they put the damn thing on in the first place and now they’re just fascinated with the red button*. Even your average elected Republican thinks Ted Cruz, aka the GOP’s more sensible candidate, is nothing but a serial arsonist running for national building inspector. I sincerely think all the lessons Barack Obama learned at great time and expense will be essential for surviving the GOP’s fevered delirium. It might break some day, or the party could fragment into a bunch of hapless third parties. But we’re not there yet. Until that day I want someone who viscerally understands these psychos, starting with her first day in office.

On social progress and the environment I honestly don’t see as much daylight as most people. We’re all Democrats. We more or less want the same thing. But if it comes down to reach vs. grasp I lean towards whoever has a better idea how to get the damn car in gear.

(*) You think I’m kidding? It took three or four government shutdowns and a couple of debt limit threats before a growing fraction of the GOP started calling for Mitch McConnell to shoot the hostages because fuck you and what’s this gun for anyway. At this point the official position of the House Freedom Caucus is to default on the debt just for the hell of it. And Cruz calls them weak.

Here’s a favorite classic pic of my dog pining for a life on the sea. Ten minutes after I took this Max met seawater for the first time. He bounded once up to his ankles, he bounded twice up to his shins, he bounded a third time and he disappeared.

Don’t worry, he came back up. 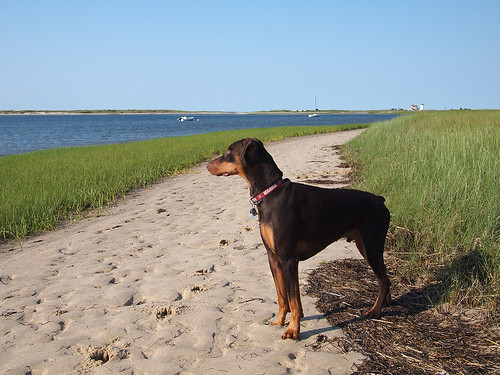