You are here: Home / Economics / Austerity Bombing / Kynect Versus The Purple People Eaters

Speaking of state exchanges and the color purple (prose or otherwise) heading into the final weekend before Tuesday’s gubernatorial election here in Kentucky, just a gentle reminder of what’s at stake here should Republican Matt Bevin win over Democratic AG Jack Conway and Kynect and Medicaid expansion goes away for 450,000 Kentuckians.

Two years into Obamacare, clear regional patterns are emerging about who has health insurance in America and who still doesn’t.

The remaining uninsured are primarily in the South and the Southwest. They tend to be poor. They tend to live in Republican-leaning states. The rates of people without insurance in the Northeast and the upper Midwest have fallen into the single digits since the Affordable Care Act’s main provisions kicked in. But in many parts of the country, obtaining health insurance is still a problem for many Americans.

These trends emerged in an analysis we undertook with the help of two organizations that are closely monitoring the progress of the health law. Last year, we used similar data to show the the substantial effects Obamacare had on reducing the number of Americans without health insurance. This year, the same groups updated their estimates of where America’s uninsured live, and the change is a lot less drastic. States that were late to expand Medicaid, including Pennsylvania and Indiana, showed substantial reductions in their uninsured residents compared with last year. In other places, the changes have been more modest. In a few — like Mississippi — things appear to have gotten worse, with fewer people having health insurance this year than last.

A county-by-county map makes this even more clear: 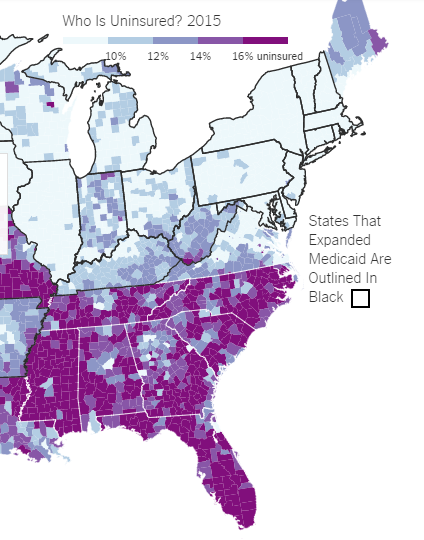 Now that Indiana and Pennsylvania are on board with Medicaid expansion, it’s very clear that the red states in the South  (and Missouri) that are under GOP rule are in real trouble. Arkansas is the lone holdout as GOP Gov. Asa Hutchinson hasn’t been able to kill it yet after inheriting it from his Democratic predecessor.

But you’d better believe that Matt Bevin will put Kentucky back into the nearly solid purple of the South if he wins in a few days.  He’s gone from wanting to scrap it totally to considering the same block grant expansion/private insurance hybrid mess that Hutchinson wants in Arkansas, but that would still kick hundreds of thousands of people off Medicaid onto private plans, and he still wants to scrap Kynect completely and force Kentucky to go to a federal exchange (again wasting millions of taxpayer dollars in the process) in order to get those plans, and at a far more expensive monthly premium level.

Previous Post: « Not substantially different to spam the Exchanges
Next Post: BoBo Redux: Who You Gonna Believe »