In yet another career comparison that does him no favors, Joe Arpaio’s showbiz buddy attempts a role as the American Gerard Depardieu. From The Wire:

Action guy Steven Seagal weighed in on the international dispute over Russia’s annexation of Crimea this week. Spoiler alert: he’s siding with his friend Vladimir Putin and not with President Obama, whom the action star believes is one Benghazi revelation away from impeachment. In an interview with the state-run Rossiskaya Gazeta, Seagal called Putin “one of the great living world leaders,” adding that he “would like to consider him as a brother.” …

The paper adds that Putin and Seagal bonded in part over their mutual love for martial arts… In the interview, Seagal said that it’s possible he may “sometime” apply for Russian citizenship. Guess that means he’s done pretending to campaign for Arizona governor.

Truly, this would be a great loss to the arts … of America’s political cartoonists. One imagines Vlad and Stevie, watching gladitor movies together, maybe trying a little friendly arm-wrestling, as the winds sweep across the steppes and the telokhraniteli idly dream.
****************

Apart from tiny minds trying on semblances of vast purport, what’s on the agenda for the evening?

END_OF_DOCUMENT_TOKEN_TO_BE_REPLACED

Some of you are annoyed by the fact that I’m fueled creatively by my massive hatred of self-styled centrists. And some of you get sick of hearing about “hippie-punching”. If you’re one of these people, stop reading this post now.

The Grist has a run-down of comments by Nate Silver’s new hire, Roger Pielke, the one who intimated he would sue some of his critics unless they started acting like “gentlemen”. Spoiler: Pielke comes across as anything but “gentlemanly” himself.

Pielke describes himself as a “blue-dog Democrat”, and looking over his non-climate tweets and blog posts, that seems about right (he loves Bill Clinton and seems happy that NCAA players may be able to unionize). And yet:

What is most troubling about Pielke Jr.’s account is its lack of balance. As we will see, the politicization of science by a handful of climate change deniers and their patrons is extremely well documented, and continues to be a major obstacle to the United States adopting effective climate policy. Yet in a 26-page chapter on the politicization of science, Pielke Jr. devotes only one paragraph to the behavior of those “opposed to action on climate change.”

What to make of people like Roger Pielke, Ann Althouse, Walter Russell Mead, Charles Lane, and Gregg Easterbrook, who often claim to vote Democrat (or at least to be independent) and even more often hold themselves up as the last bastions of decency and fairness, yet spend all of their time attacking Democrats and often in terms that would make David Broder blush?

Is it all about punching hippies?

END_OF_DOCUMENT_TOKEN_TO_BE_REPLACED

As a black man who deals with issues of race on a regular basis, there are times when I do not want the opinion of white men who have not and will not ever experience some of things that are commonplace for people of color. I would imagine this is similar to women who don’t always want to hear some dude’s opinion about what she should do with her body or deal with sexism. This isn’t an earth-shattering concept. Unless your name is Jamilah Lemieux.

Last Thursday Lemieux’s life was turned upside down when a random tweet about a new black Republican magazine she was sent was responded to by someone who then brought in other folks including RNC Deputy Press Secretary Raffi Williams. When she said she didn’t want any more info about Carson’s project, Williams responded “hoped you would encourage diversity of thought.” This was when Lemieux responded with… 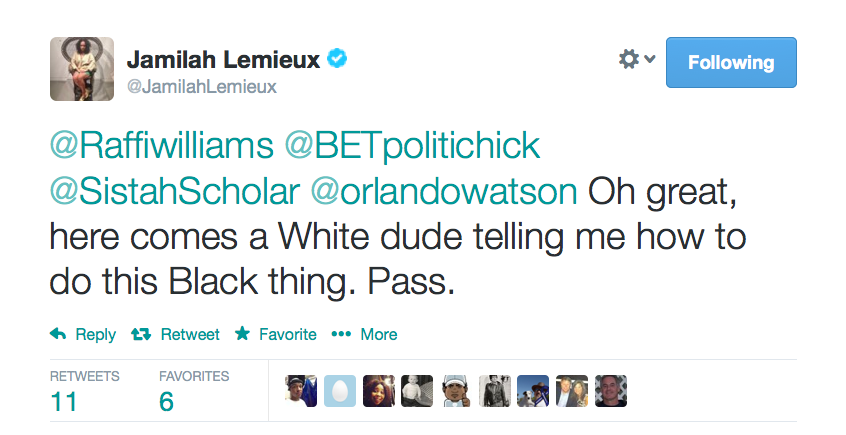 She was unaware that Williams was black, but when she found out she apologized and alerted him that she still had no urge to have this discussion. This set off a firestorm that would ignite virtually every right-wing blog and news site and would garner a press release by Chairman of the RNC, Reince Priebus. Virtually every account of the story ignored the facts and instead painted Lemieux as a raging hateful racist and anyone who defended her was then branded as one as well.

So we decided to help set the record straight, as we #StandWithJamilah:

And on today’s show we followed up with more information plus a discussion around what is becoming a regular thing within social media–attacking Women of Color with a combo of racism/sexism and an overall lack of respect.  Imani Gandy and I unpacked this today.

All this makes us wonder: Can we actually have a conversation about race without it turning into name calling and death threats?

END_OF_DOCUMENT_TOKEN_TO_BE_REPLACED The most important story of the last year and no one noticed:

Yes. It is rigged. Also read this companion piece in the NY Times.

END_OF_DOCUMENT_TOKEN_TO_BE_REPLACED

@SheltieDad @JonathanCohn Party of Lincoln — George Lincoln Rockwell, that is.

The NYTimes notices another trend…

CINCINNATI — Pivotal swing states under Republican control are embracing significant new electoral restrictions on registering and voting that go beyond the voter identification requirements that have caused fierce partisan brawls.

The bills, laws and administrative rules — some of them tried before — shake up fundamental components of state election systems, including the days and times polls are open and the locations where people vote.

Republicans in Ohio and Wisconsin this winter pushed through measures limiting the time polls are open, in particular cutting into weekend voting favored by low-income voters and blacks, who sometimes caravan from churches to polls on the Sunday before election.

Democrats in North Carolina are scrambling to fight back against the nation’s most restrictive voting laws, passed by Republicans there last year. The measures, taken together, sharply reduce the number of early voting days and establish rules that make it more difficult for people to register to vote, cast provisional ballots or, in a few cases, vote absentee.

In all, nine states have passed measures making it harder to vote since the beginning of 2013. Most have to do with voter ID laws. Other states are considering mandating proof of citizenship, like a birth certificate or a passport, after a federal court judge recently upheld such laws passed in Arizona and Kansas. Because many poor people do not have either and because documents can take time and money to obtain, Democrats say the ruling makes it far more difficult for people to register….

The flurry of new measures is in large part a response to recent court rulings that open the door to more restrictive changes.

Last year, the Supreme Court struck down a central provision of the 1965 Voting Rights Act. The decision allowed a number of mostly Southern states to alter their election laws without the prior approval once required from the Justice Department. A few weeks later, free of the mandate and emboldened by a Republican supermajority, North Carolina passed the country’s most sweeping restrictions on voting….

The most surprising note is that the Grey Lady didn’t wait until mid-November to share this with the rest of us, because bipartisan.

END_OF_DOCUMENT_TOKEN_TO_BE_REPLACED

Kathleen Geier is writing at the Baffler if you’re looking for something to read, like this piece which will make you hate Apple and Google.

END_OF_DOCUMENT_TOKEN_TO_BE_REPLACED

Nuts of a feather, send their bairns to school together:

[…] School immunization data for the 2012-13 school year obtained by Daily Intelligencer from the New York State Department of Health shows that some 245 New York City private schools fell short of the 95 percent vaccination rate which experts say prevents measles from spreading — an effect known as “herd immunity.” Of those schools, 125 had rates below 90 percent, and 37 fell below 70 percent. The nine private schools with the lowest rates — between 41.5 percent and 18.4 percent — were so underimmunized that if any one of them somehow seceded and became a Sealand-style micro-nation, it would literally have had the worst measles vaccination rate in the world, according to WHO numbers.

For comparison, among the more than 800 private schools in the city, the overall immunization rate last year was 97 percent. In public schools, the current immunization rate is above 98 percent, according to the New York City Department of Education. While the DOE wouldn’t share rates for individual public schools, no district average falls below the herd-immunity threshold of 95 percent.

In many cases, anti-vaccine parents favor certain schools. Like some of their West Coast cousins, New York’s Waldorf schools — founded on the philosophy of Austrian mystic Rudolf Steiner, who believed vaccines “drive all inclination toward spirituality out of people’s souls” — lag on immunization rates. According to the Department of Health data, only 74.7 percent of the students at the Upper East Side’s Rudolf Steiner School, the nation’s first Waldorf school, were fully vaccinated last year. At Brooklyn Waldorf in Clinton Hill, the figure was 60.1 percent.

I hope the Waldorf childrens’ choir is brushing up their performance of Kindertotenlieder.

(Thanks reader R for sending this in.)