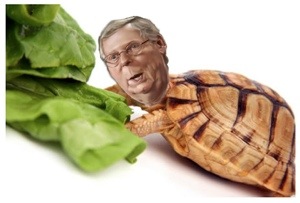 Mitch “Fuck You Make Me” McConnell wants the President to lead on the debt. Let that sink in for a while:

Senate Minority Leader Mitch McConnell (R-KY) vowed on Sunday that Republicans would force significant spending cuts in exchange for raising the debt ceiling even if President Barack Obama had to be “dragged kicking and screaming.”

“What we’re saying is that the biggest problem facing the country is our excessive spending,” McConnell told NBC’s David Gregory. “We’ve watched the government explode over the last four years. We’ve dealt with the revenue issue, and now the question is will the president lead? Why should we have to be bringing him to the table?”

Gregory pointed out that trillions of dollars in spending cuts had been part of last year’s Budget Control Act and Republicans had refused to accept significant cuts in entitlement programs as a part of a larger deals offered by Democrats going back to debt ceiling negotiations in 2011.

“You can re-litigate the past if you want to,” McConnell laughed. “I wish the president would lead us on the discussion rather than putting himself in the position of having to be dragged kicking and screaming to discuss the single biggest issue facing our future. You know, until we adjust the entitlements so that they meet the demographics of our country, we can’t ever solve this problem. The time to solve it is now.”

Sen. Mitch McConnell Said “The Single Most Important Thing” For Republicans To Achieve In The Next Congress Was Ensuring President Obama Was A One-Term President. “Senate Minority Leader Mitch McConnell came under sharp attack from the White House and Democrats Tuesday for saying that his top priority in the next Congress is to ensure that President Barack Obama serves only one term. The Kentucky Republican made the statement during an interview with National Journal. But it’s a variation on a line he has been using as he has stumped the country on behalf of Republican candidates in advance of the Nov. 2 midterm election. ‘The single most important thing we want to achieve is for President Obama to be a one-term president,’ he said in the interview.” [Louisville Courier-Journal, 10/26/10]

New York Times: Before President Obama Even Took Office, Senate Minority Leader Mitch McConnell Devised A Strategy To Deny Democrats Any Republican Support On Major Legislation. “Before the health care fight, before the economic stimulus package, before President Obama even took office, Senator Mitch McConnell, the Republican minority leader, had a strategy for his party: use his extensive knowledge of Senate procedure to slow things down, take advantage of the difficulties Democrats would have in governing and deny Democrats any Republican support on big legislation. Republicans embraced it. Democrats denounced it as rank obstructionism. Either way, it has led the two parties, as much as any other factor, to where they are right now.” [NYT, 3/16/10]

Go ahead, Mitch — continue to cry about how the president done did you wrong. It must be very sad for you, considering that you failed at your only goal over the last four years — making Prezzy O a one-term president. Ouch. That’s got to sting a bit.

But we’re tired of you. So when you’re done crying, take your jowls and go home, sir. Or maybe, find a place that sells necks, and buy yourself one.