In the spirit of Balloon Juice’s love for all animals adopted, I thought that I would send along a photo of our newly adopted office cat….named Sandy of course.

My office is located on the beach in Cosey Beach East Haven, CT. This neighborhood took it hard last year with Irene and again this year with Sandy. The house between us and the water was washed away this time and countless others were damaged beyond repair. When we returned to our office (converted apartment) we found the cat meowing loudly at the door and being huge animal lovers, my partner and I let him in and he is here for good.

It did not take long for him to make himself comfortable, as you can see by the picture which was taken less than four hours after we let him in! He loves sitting in our office chairs when we are not in them and spends the rest of the time on my desk or lap, purring louder than any cat I have ever had.

Here is the kicker, when we found out who he belonged to, we reached out, but were told to either just let him about the neighborhood or drop him off at a shelter. I can never understand how anybody could feel that way about a living thing, but at least he has a happy ending.

One final note, he does not have the girth of Tunch, but his belly is only a couple of stamps from dragging on the ground.

END_OF_DOCUMENT_TOKEN_TO_BE_REPLACED

__
__
I’ve always had a weakness for leopard prints… and sparklies.

END_OF_DOCUMENT_TOKEN_TO_BE_REPLACED

The Republicans are clowns. Destructive, dangerous, mendacious clowns. But, clowns nonetheless. And while it is easy to see them as the problem, they really aren’t. They are just deluded and scared, greedy and ignorant.

Here’s the reality: Our country is being torn apart by income inequality. We’re one of the richest countries in the world, and yet we can’t afford to provide health care to our citizens because our health care system is twice as expensive as anyone else’s. We’re an unparalleled force for good in the world, and yet our engagement in the world in fraught due to bad choices and ill-considered commitments. We spend huge amounts on education and yet our educational system is problematic at best.

We have, in office, just an amazing, inspiring president. We have four years more  to make a difference. The first four have been pretty damn good, and the next four can be historic. But victory isn’t about kicking the GOP in the teeth — as fun as that might be — but in making a real difference in the lives of our fellow citizens.

I know you all know all of this. I am preaching to the choir. But, I guess, I want to encourage all of us to aim higher now — myself included. It is so easy, so tempting to just focus on tactical victories against the Republicans. And yet, I think we live in a historic moment. Let’s not squander it.

When I think of this, I can’t help but go back to 2008… to Obama concession speech in New Hampshire. It is is a speech that, I think, deserves to be remembered with the great political addresses in our history. A speech that is moving and realistic, intelligent and inspiring.

Anyway, can you guess, I’ve had a few… but that said… consider this a Friday night music thread:

END_OF_DOCUMENT_TOKEN_TO_BE_REPLACED

“You can count voters and votes,” Mr. Mansfield says. “And political science does that a lot, and that’s very useful because votes are in fact countable. One counts for one. But if we get serious about what it means to vote, we immediately go to the notion of an informed voter. And if you get serious about that, you go all the way to voting as a wise choice. That would be a true voter. The others are all lesser voters, or even not voting at all. They’re just indicating a belief, or a whim, but not making a wise choice. That’s probably because they’re not wise.”

By that measure, the electorate that granted Barack Obama a second term was unwise—the president achieved “a sneaky victory,” Mr. Mansfield says. “The Democrats said nothing about their plans for the future. All they did was attack the other side. Obama’s campaign consisted entirely of saying ‘I’m on your side’ to the American people, to those in the middle. No matter what comes next, this silence about the future is ominous.”

At one level Mr. Obama’s silence reveals the exhaustion of the progressive agenda, of which his presidency is the spiritual culmination, Mr. Mansfield says. That movement “depends on the idea that things will get better and better and progress will be made in the actualization of equality.” It is telling, then, that during the 2012 campaign progressives were “confined to defending what they’ve already achieved or making small improvements—student loans, free condoms. The Democrats are the party of free condoms. That’s typical for them.”

All this from a guy who probably doesn’t the approximate GDP of the United States and who may well believe that Syria is Iran’s path to the sea. Yeah, I get that he’s 80 years old and at least half-senile.

END_OF_DOCUMENT_TOKEN_TO_BE_REPLACED 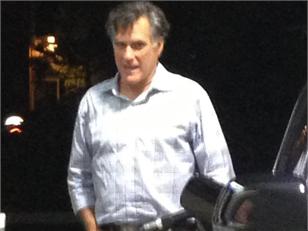 If Mitt Romney wasn’t such a lying douchebag who played to the worst elements of his base with repeated racist, classist, misogynist, and every-other-kind-of-ist-you-can-imagine comments, I might feel sorry for him. No wait — I probably wouldn’t.

SAN DIEGO — The man who planned to be president wakes up each morning now without a plan.

Mitt Romney looks out the windows of his beach house here in La Jolla, a moneyed and pristine enclave of San Diego, at noisy construction workers fixing up his next-door neighbor’s home, sending regular updates on the renovation. He devours news from 2,600 miles away in Washington about the “fiscal cliff” negotiations, shaking his head and wondering what if.

The defeated Republican nominee has practically disappeared from public view since his loss, exhibiting the same detachment that made it so difficult for him to connect with the body politic through six years of running for president. He has made no public comments since his concession speech in the early hours of Nov. 7, and avoided the press last week during a private lunch with President Obama at the White House. Through an aide, Romney declined an interview request for this story.

After Romney told his wealthy donors that he blamed his loss on “gifts” Obama gave to minority groups, his functionaries were unrepentant and Republican luminaries effectively cast him out. Few of the policy ideas he promoted are even being discussed in Washington.

“Nothing so unbecame his campaign as his manner of leaving it,” said Robert Shrum, a senior strategist on Democratic presidential campaigns. “I don’t think he’ll ever be a significant figure in public life again.”

Yet friends insist Romney is not bitter. Bitterness, said one member of the family, “is not in the Romney genetic code.”

One longtime counselor contrasted Romney with former vice president Al Gore, whose weight gain and beard became a symbol of grievance over his 2000 loss. “You won’t see ‘heavyset, haggard Mitt,’” he said. Friends say a snapshot-gone-viral showing a disheveled Romney pumping gas is just how he looks without a suit on his frame or gel in his hair.

Well, at least he’s not gonna get fat like Al Gore, mirite?

END_OF_DOCUMENT_TOKEN_TO_BE_REPLACED

Because God put oil and fossil fuels on this earth for us to exploit, dagnabbit, and if we don’t stop focusing on all this “energy independent” and “green energy” malarkey, we’re basically unwrapping a special present from God, and staring disdainfully at its contents before we summarily throw that gift right back in God’s stupid face.

Bryan Fischer, the director of issues analysis of the conservative fundamentalist American Family Association, on Thursday told a so-called “expert” who denies climate change that not using God’s fossil fuels would be like “crushing” someone’s feelings by rejecting their birthday present.

The Cornwall Alliance’s Calvin Beisner, who has previously said that believing in climate change “is an insult to God,” explained on Thursday that the Bible said it was also very rude to not use oil, coal and natural gas.

Fischer likened the situation to a birthday present he was given at the age of six.

“And you think, that’s kind of how we’re treating God when he’s given us these gifts of abundant and inexpensive and effective fuel sources,” Fischer added. “And we don’t thank him for it and we don’t use it.”

“You know, God has buried those treasures there because he loves to see us find them.”

Listen up, America — when God created the earth, took a rib from Adam, slathered some barbecue sauce on it, and fed it to the dinosaur that Eve was riding when Adam and Eve first hooked up and decided to go apple-picking, God also dumped a bunch of fossil fuels, oil, and other shit all over the earth so that God-lovers could find it and use it. ALL OF IT. God set up an Eternal Easter Egg Hunt just for you, you ungrateful jerks, and all this “oh noes! climate change!” nonsense is fucking up God’s program. He likes it when we find the treasures he has hidden for us, and there’s still some resources we haven’t drained yet! So what are you doing sitting around contemplating buying a fucking Prius?!

Stop being an asshole and trying to “save the planet.” Put down your goat milk latte, unplug your stupid electric car, and go off-roading in your Hummer to search for new wildlife reserves to drill.

It’s what Jesus would have done.