Watching the worst bowl game ever. Rutgers and Va. tech have the worst offenses I’ve seen since, well, every Steelers game this season.

END_OF_DOCUMENT_TOKEN_TO_BE_REPLACED 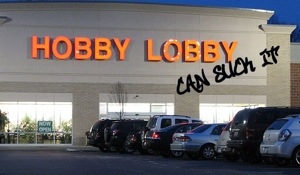 Yesterday, I told you that Justice Sotomayor rejected Hobby Lobby’s emergency appeal, thus requiring Hobby Lobby to suck it up, provide contraception access without copay to its employees, and wait for its case to proceed in district court.

Oklahoma City-based Hobby Lobby will defy a federal law that requires employee health care plans to provide insurance coverage for types of contraception that the firm’s owners consider to be “abortion-causing drugs and devices,” an attorney for the company said Thursday.

With Wednesday’s rejection of an emergency stay of that federal health care law by Supreme Court Justice Sonia Sotomayor, Hobby Lobby and sister company Mardel could be subject to fines of up to $1.3 million a day beginning Tuesday.

As for the potential fines, Duncan said, “We’re just going to have to cross that bridge when we come to it.”

Setting aside the fact that Plan B is not an “abortion-inducing drug”, Hobby Lobby is being flat-out ridiculous. Why?

BECAUSE HOBBY LOBBY STOPPED PROVIDING CONTRACEPTION IN ITS HEALTH INSURANCE PLANS ONLY AFTER THE OBAMA ADMINISTRATION TOLD THEM THEY WOULD HAVE TO START PROVIDING IT.

That’s right. Hobby Lobby used to provide what it views as baby-murdering drugs and only balked when the birth control benefit would require them to do so.

As I wrote back in September:

END_OF_DOCUMENT_TOKEN_TO_BE_REPLACED

Via TPM, ponder this report on the latest in the fiscal clusterf**k talks between our clueless toads and the President:

“I’m modestly optimistic that an agreement can be achieved,” he added.

Obama announced that the fate of a potential deal lies with Senate Majority Leader Harry Reid (D-NV) and Minority Leader Mitch McConnell (R-KY), who will work together to present a prospective package to their respective conferences over the weekend.

Should that effort fail, however, Obama indicated that he would call upon Reid to bring the original White House proposal — extending Bush era tax rates on income below $250,000 including other measures — for an up-or-down vote in the Senate. “We should let everybody vote, that’s the way this is supposed to work,” Obama said.

As Jed Lewison over at the Great Orange Satan put it:

Basically, Obama is saying that if there is no deal, if Boehner and McConnell don’t allow a vote, he’s going to go to town on them—that he’s prepared to use the entire weight of the presidency to hold them accountable for being obstructionists. And don’t forget: he’s got the inauguration and the state of the union to follow through on his threat.

This is the guy I hoped would show up today.  And it appears he did.  Channeling (imperfectly) my inner Tim F. — if you are represented by a GOPster, give ’em a call.  Hell, if you’re represented by friends of my reps, Barney Frank, John Kerry and (for this last little while) the Senator from Cosmopolitan, the Hon. Scott Brown, (Holy FSM, do I feel good taunting that man), then give the good folks a call too, just to buck them up.

END_OF_DOCUMENT_TOKEN_TO_BE_REPLACED

“We only really care about privacy and wiretapping when a Republican is President.”

END_OF_DOCUMENT_TOKEN_TO_BE_REPLACED

On the day of the massacre at Sandy Hook Elementary School in Newtown, Connecticut, two new petitions were added to the Obama administration’s home-brewed “We the People” petitioning system.

One called on the White House to “immediately address the issue of gun control” through legislation; the other demanded the Westboro Baptist Church be “legally recognize[d]” as a hate group.

Spurred by WBC threats to picket funerals of deceased Sandy Hook victims, the petition is now officially the most popular “We the People” petition ever posted on the site since its launch in September of last year…

Apart from denigrating IRL trolls, what’s on the agenda for the evening?

END_OF_DOCUMENT_TOKEN_TO_BE_REPLACED Am I the only one who looks at this and snickers? Not only is it stupid politics and annoying extra work for baristas, but it’s also an exhortation to simultaneous orgasm.

END_OF_DOCUMENT_TOKEN_TO_BE_REPLACED

This looks so awesome I am afraid I am falling for an elaborate hoax: