You are here: Home / Gun Issues / Gun nuts / The U.K.’s Response to the Dunblane Massacre Should Inform Ours 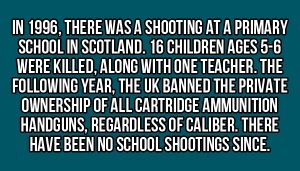 In 1996, a man walked into a school in Dunblane, Scotland armed with four handguns. He shot and killed 16 children before killing himself. A year later, after public debate on gun-control laws, strict gun control laws were passed, effectively making private ownership of handguns illegal in the UK.

LONDON — As the world joined Americans in mourning the school massacre in Connecticut, many urged U.S. politicians to honor the 28 victims, especially the children, by pushing for stronger gun control laws.

Twitter users and media personalities in the U.K. immediately invoked Dunblane — a 1996 shooting in that small Scottish town which killed 16 children. That tragedy prompted a campaign that ultimately led to tighter gun controls effectively making it illegal to buy or possess a handgun in the U.K.

“This is America’s Dunblane,” British CNN host Piers Morgan wrote on Twitter. “We banned handguns in Britain after that appalling tragedy. What will the U.S. do? Inaction not an option.”

The Dunblane school massacre occurred at Dunblane Primary School in the Scottish town of Dunblane on 13 March 1996. The gunman, 43-year-old Thomas Hamilton (b. 10 May 1952), entered the school armed with four handguns, shooting and killing sixteen children and one adult before committing suicide. Along with the 1987 Hungerford massacre and the 2010 Cumbria shootings, it remains one of the worst criminal acts involving firearms in the history of the United Kingdom.

Public debate subsequent to these events centred on gun-control laws, including media-driven public petitions calling for a ban on private ownership of handguns and an official enquiry, the Cullen Report. In response to this debate, the Firearms (Amendment) Act 1997 and the Firearms (Amendment) (No. 2) Act 1997 were enacted, which effectively made private ownership of handguns illegal in the United Kingdom.

We have to do something. We just have to. And that something does not include arming teachers or posting armed guards in classrooms, and anyone who would suggest such is insane.

Teachers are already underpaid and under-appreciated. Republicans have made it abundantly clear that they view teachers as expendable. And it is those very same Republicans who now suggest that teachers undergo combat training in order to protect themselves and their students.

Something must be done.

I don’t know if we should ban all handguns. But I do know that arming more people or praying harder in schools is not the answer to the gun violence epidemic in this country.