You are here: Home / Civil Rights / Women's Rights / The War On Women / Orange County Judge Denies That Rape is Even Possible; Blames Rape Victim for Not Fighting Her Rapist 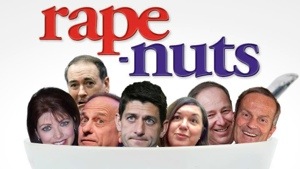 Steve Benen flagged this story this morning — of an Orange County judge who was reprimanded by the Commission on Judicial Performance for stating in court that a rape victim couldn’t have been really really raped because she didn’t put up a fight, and that the rape wasn’t a “real, live criminal case,” but only a “technical rape.” (The Judge later apologized, claiming that he was frustrated during arguments with the prosecution about sentencing.)

So, to recap: A man threatened to mutilate a woman’s face and vagina with a heated screwdriver, and was convicted of “rape, forcible oral copulation, domestic battery, stalking and making threats against his former live-in girlfriend,” but clearly it’s the victim’s fault because she didn’t fight hard enough and because, apparently, her body’s natural “don’t rape me, please” protection system wasn’t fully operational.

Prosecutors sought a 16-year sentence, but Johnson instead imposed a six-year prison term. Then he explained why.

According to materials released yesterday, the judge said, “I’m not a gynecologist, but I can tell you something. If someone doesn’t want to have sexual intercourse, the body shuts down. The body will not permit that to happen unless a lot of damage in inflicted, and we heard nothing about that in this case. That tells me that the victim in this case, although she wasn’t necessarily willing, she didn’t put up a fight.”

Johnson added that the rape of Gurel’s victim was “technical,” and not “a real, live criminal case.”

You don’t need to be a gynecologist to know that the body doesn’t shut down when a woman doesn’t want to have sexual intercourse. Women do not have penis guillotines in their lady areas to ward off intruders.

Funny how it is easier for some to invent science to avoid dealing with the very real problem of rape and rape culture in this country.

Republicans should just decriminalize rape already and be done with it. (I say “Republicans” because Orange County is a hotbed of republicanism.)

As an aside, on the recommendation of @aliceinthewater, I have been reading The Knitting Circle Rapist Annihilation Squad. It’s a dark comedy about women who decide to take the law into their own hands by stabbing with knitting needles men who rape. It’s a dark comedy. Also? Perhaps an instruction manual.