You are here: Home / Politics / An Unexamined Scandal / Petraeus Scandal: It wasn’t 30,000 emails, you guys. Get a grip.

WaPo wants you to know that General Allen and Jill Kelley did not exchange 30,000 emails. The media got it wrong. (I didn’t, but that’s neither here nor there.) It was 30,000 pages of emails; but when you remove all the repeated email threads (you know, at the bottom), and when you delete headers, email signatures and lolcats, and then divide by two and carry the one, it’s only, like, three emails.

A defense official originally stated that the e-mails, sent since about 2010, numbered 20,000 to 30,000. It was quickly reported that this number in fact refers to the number of printed pages of correspondence, which actually number “a few hundred,” Craig Whitlock and Rajiv Chandrasekaran reported in today’s Post.

“He’s never been alone with her,” the senior official said. “Did he have an affair? No.”

The senior official also emphasized that the volume of communications between the two “was nowhere near” 20,000 to 30,000 personal messages. The official said the high page count reported by the FBI may have been the result of printing numerous individual messages that contained lengthy threads of earlier exchanges.

If 20,000 to 30,000 still seems like a lot of pages, consider that investigators likely reprinted entire threads every time a new message was added, and that the rigorous requirements for legal document discovery often entail repetitions, onerous formatting restrictions, and exhaustive inclusiveness. As Reuters reporter Erin Smith tweeted, “Clearly anyone who thinks that 30,000 documents = 30,000 substantive/non-duplicative documents has never suffered through a doc review.”

WaPo wants you to stop getting it wrong, America. Why? Because this is the crucial part of the story, obvs, and WaPo wouldn’t be doing its job if it didn’t report accurately the number of times General Allen was ignoring his job, or, you know, not killing bin Laden, just so he could email Ms. Kelley sideways buttcones. “get on with the slut-shaming, shall we? That’s always a good time. 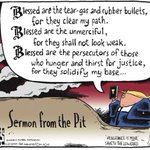