You are here: Home / Politics / Crazification Factor / Is Gary Johnson the Reason Mitt Romney Is Talking About Birth Certificates?

Neither a racist nor panderer be. 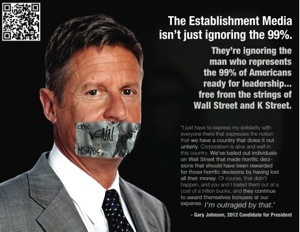 Mitt Romney’s racist birther comments make no sense unless viewed as an attempt to pander to his base. But why would Romney need to be pandering to his base this late in the election? The 27 percenters are never going to vote for Obama. He should have the crazification factor voters locked up by now. But maybe the Libertarians are pulling some of them towards Gary Johnson?

Here’s an August 13 press release from the Libertarian Party in which they demand that the major polling outfits begin including Gary Johnson in state presidential polls:

But look at the numbers when he’s included in statewide polls against Obama and Romney. 13% in New Mexico. 9% in Arizona. 7% in Colorado. 7% in New Hampshire. 8% in Montana. (PPP and others)

Governor Johnson’s poll numbers – and his votes this November – may be the critical factor in “Tipping Point” or battleground states like North Carolina, Virginia, Florida, Nevada, and Colorado – where Obama and Romney are 1% to 6% apart. Mitt Romney needs these 5 states, these 74 Electoral votes to win the White House.

Starting now, these organizations need to include 2-Term Governor Gary Johnson in all state Presidential polls – especially in these 5 “Romney Must Win” battleground states.

Gary Johnson was a 2-Term Republican Governor of New Mexico (1995-2003). During his 8 years in office, he vetoed over 750 bills – more than all other governors combined. He was repeatedly recognized and honored as the “most fiscally conservative Governor in America.”

Previous Post: « Tragically, I Can See Romney Doing This — Unironically
Next Post: Open Thread: “May You Grow Like An Onion, With Your Head in the Ground — And Then May THe Ground Be Fracked!” »