You are here: Home / You’re Being Spun Every Time Condi Rice Is Mentioned as a Possible Running Mate

Former Secretary of State Condoleezza Rice looked to downplay speculation that she could be inching up Mitt Romney’s short list for vice president after her widely regarded policy briefing last weekend at a meeting of his top donors.

“I didn’t run for student council president. I don’t see myself in any way in elective office,” Rice told “CBS This Morning” on Tuesday….

When “CBS This Morning” host Charlie Rose pressed Rice, noting she hadn’t technically said she wouldn’t accept the offer to be vice president, the former secretary of state was more definitive.

Charlie Rose is being a useful idiot. So is everyone who reports this without noting that the scenario is preposterous.

It used to be that every time a new Republican won the presidential nomination, the pro-choice Tom Ridge, from the delegate-rich state of Pennsylvania, was mentioned as a possible running mate. It happened in 2000. It happened in 2008. Funny thing — Ridge never got the #2 slot. Nor, famously, did the pro-choice Joe Lieberman in ’08, even though John McCain really wanted to run with him.

And that was before the 2010 GOP/Tea Party takeover of many statehouses and state legislatures, which led to this: 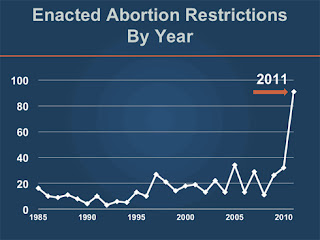 Condi Rice as running mate? In the GOP? In 2012? Even though she says she’s just “mildly pro-choice”? Are you crazy?

I’m not even going to get to the rumors about Rice’s sexual orientation. The abortion issue is a 100% disqualifier before we even get there. Everyone in the elite media knows that. And yet Charlie Rose and others play along, happy to be spun.